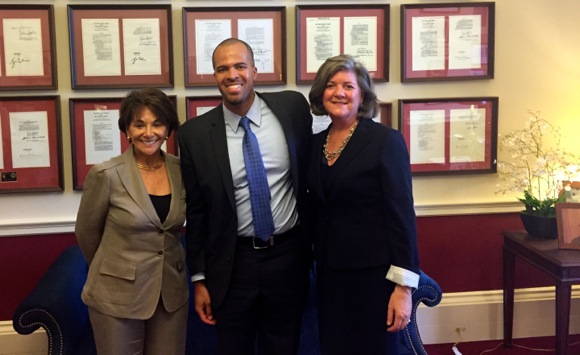 Kay O’Neill came to Menlo Park in 1988, buying a little bungalow the same weekend she married husband Peter. She worked as a licensed marriage and family therapist for 20 years before first getting involved with Acterra’s Be the Change environmental leadership program, and then meeting Van Jones, co-founder of #YesWeCode.

“Meeting Van pivoted by career into workforce development,” she says. “The goal of #YesWeCode is to bring diversity to tech by connecting low-opportunity youth to training and ultimately tech careers.

Along the way she got, as she explains, “on Obama’s bucket list.” “We [#YesWeCode] got recognized as a Leader of Excellence in Apprenticeship Development, Education and Research at the ApprenticeshipUSA Summit at the White House held the second week of September.”

ApprenticeshipUSA launched in response to the President’s call for increased apprenticeships in his 2014 State of the Union.  #YesWeCode announced its apprenticeship (job-training) pilot in Oakland earlier this year as part of The White House TechHire initiative.

Kay views her role as chief architect of the talent pipeline. “We are losing this untapped talent, the hidden coders,” she says. “We need the home grown workforce to close the economic equity gap. We say, ‘#YesWeCode graduates will: Make Apps. Make Money. Make History.'”

Through the TechHire initiative, #YesWeCode has also committed to raising a $10 million scholarship fund for The #YesWeCode Coding Corps, and is a founding partner for two TechHire cities, Oakland and San Jose.

Kay traveled to Washington with colleague Johnnie Williams, who is running the apprenticeship program. In addition to the White House summit, they participated in a Congressional event on Capitol Hill and met with Congresswomen Barbara Lee and Anna Eshoo. Side note: Kay was one of the corps of women who helped get Eshoo first elected in 1992.

You can learn more about #YesWeCode and how to donate online.