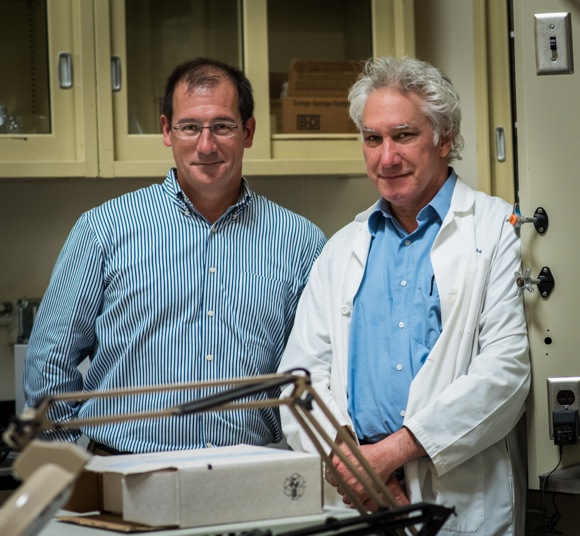 There are certain rare cancers that don’t seem as rare when almost everyone you talk to knows someone who has — or had — the disease. Such is the case with glioblastoma multiforme (GBM), the most common and deadly form of human brain cancer.

“It may seem more prevalent than it is statistically because it affects people in the prime of life,” said Jeffrey Bacha, President & CEO of DelMar Pharmaceuticals, which has its research and clinical operations in Menlo Park. “And it’s one of those cancers that’s difficult to treat.”

Jeff and DelMar co-founder Dennis M. Brown, Ph.D., who serves as the biopharmaceutical company’s Chief Scientific Officer, view the product candidate they are investigating to treat GBM — the drug VAL-083 — as “starting on the good side of the 50 yard line,” or, in other words, “farther down the field.”

“We are not starting with discovery,” said Jeff. “We are starting with something that has been studied and can look at what tumor type it may or may not be useful in treating. That saves time and money.”

In more than 40 Phase 1 and 2 clinical studies sponsored by the U.S. National Cancer Institute, VAL-083 demonstrated safety and efficacy in treating a number of cancers including lung, brain, cervical, ovarian tumors and leukemia. VAL-083 is approved in China for the treatment of chronic myelogenous leukemia and lung cancer and has received orphan drug designation in Europe and the U.S. for the treatment of gliomas.

Jeff and Dennis took different paths to their industry before meeting and deciding to collaborate at DelMar.

Dennis, who has lived in Menlo Park since 1979, came from New York to do a post doc at Stanford focusing on academic drug discovery and development. He started working with a neighbor, Ed Luck, and together they founded Matrix Pharmaceutical.

“It was all a bit serendipitous,” he said. “I’ve stayed in the science part of the business and let other people find the money and deal with the regulatory issues.”

Jeff studied bio-physics at UC San Diego with the intention of going to medical school. But after a stint in a lab, he found himself drawn to regulatory and corporate issues and pursued an MBA instead of medicine.

“Many of my family members have had cancer,” he said. “I was drawn to looking for the right cancer product, one with a unique approach. There is that opportunity of doing good.

“Phase I testing of VAL-083, patients had a median survival of 9.0 months versus. 4.4 months. We are treating patients who have failed other therapies [Avistan and Temodor]. That is different than looking at this drug in newly-diagosed patients.

“We anticipate reporting additional data from the Phase 2 expansion cohort at upcoming peer reviewed scientific meetings and are implementing our plan to advance VAL-083 into a Phase 2/3 registration-directed clinical program in refractory GBM.

“Based on promising results of grant-funded research, we are also preparing to expand the VAL-083 clinical research portfolio into non-small cell lung cancer (NSCLC). We believe that the unique mechanism of action of VAL-083 provides a basis to address unmet medical needs in a range of cancers.

“It’s important to keep in mind that there’s a certain passion related to cancer. If we can help patients and extend lives, everything else follows.”