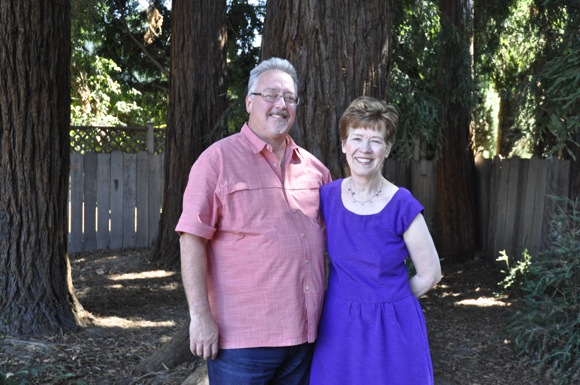 Some things stay the same: Lutticken’s and Country Corner are in their familiar places along the Alameda. Ann’s Coffee Shop and Flegel’s can still be found on Santa Cruz Avenue.

But did you know that Sharon Heights was once the name of a 32-room mansion, not just a neighborhood. And during the 50s, helicopters were manufactured in Menlo Park?

Those two nuggets — and many more, complete with accompanying photos — can be found in the newly-published book, Menlo Park, co-authored by four long-time Peninsula residents, Janet and Reg McGovern and Betty and Nick Veronico, and published by Arcadia Publishing. (Janet and Nick are pictured above.)

“I first met Reg in 1989 when I was writing Wreckchasing, a book on airplane crashes,” said Nick, author of 35 other non-fiction books. “Reg had taken photos in 1953 when a British Commonwealth Pacific Airlines DC-6 plane crashed in Woodside, and let me use them for my book. 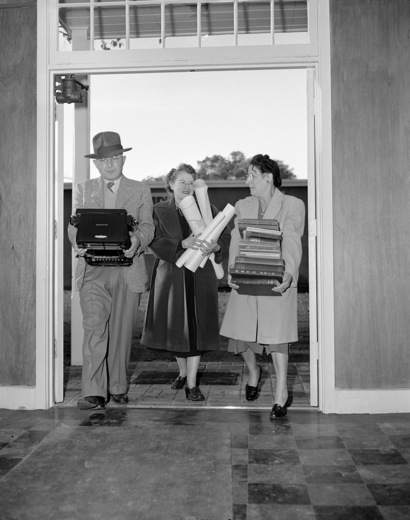 Added Janet: “When we first talked about a Menlo Park book, Reg didn’t think he had that many photos because it was south of his beat working for the Redwood City Tribune. But turns out he had a lot more than he thought.”

In addition to photos by Reg, who passed away last month at the age of 95, there are photos from the Menlo Park Historical Association and collections owned by Kathleen Lorist and John Harder, as well as those supplied by long-time businesses such as Draeger’s, Beltramo’s, and Kepler’s.

Janet, who describes herself as a “Redwood City person” was surprised at the contrast between her town’s growth and Menlo Park. “In the 1870 census, Redwood City had 700 people and Menlo Park 235, about a third of whom came from Ireland and worked on the area’s large estates.

“But both World War I and II had huge impacts on Menlo Park what with Camp Fremont and the Dibble General Hospital, and not as big an impact on Redwood City.”

Nick was fascinated about how the area east of El Camino developed, including the break up of the Flood estate.

“These Arcadia books are not complete histories,” Janet said. “They are great starting points where you can learn a lot of things quickly. Then you can decide if you want to dig deeper.”

Menlo Park is available at Kepler’s and through the Menlo Park Chamber of Commerce as well as on Amazon.

I like to say I wouldn’t buy the book personally. it doesn’t include a lot of information about Menlo park that is should. I bought the book read it and I wanted to return it because it’s a poorly written book. I contacted arcadia about it and was hoping the authors would contact me and we can make A new book with more accurate information but I haven’t heard from the authors.

Things that are left out in case anyone was wondering.

I grew up on Bay road in the adobe house that houses the superintendant of Flood Park. Many years spent in the swimming pool, playing with games from the game house and of course the snow that fell in 1961. Yes that part of Menlo Park is always ignored. Just over the fence was where Shirley Temple Black lived and many don’t know but Doris Day Melcher also lived in Menlo Park. I guess I should look at the book before commenting.
Jean Bagley step-father was Walter Sjosten park supervisor 1955-1965

Everyone thinks that area of Menlo park is east palo alto since there very close. it sucks because a lot of interesting things have happened in that part of Menlo park that no one realizes unless you lived there. or know Menlo park history very well. The old house next to the church on bay road I think should be a national historic landmark. It was built in 1846ish.

Have a large Hatfield aerial view of Flood Park c. 1950 showing the adobe
house, pool…. I may be contacted at the Menlo Park Historical Assoc.
Office 650-330-2522 or personal email

We were in the same grade at Flood school. Didn’t you have a brother named Rusty? I tried to get a Flood reunion going about 20 years ago, but it never happened. I found about 30 people and started a group on Yahoo groups; it’s still there but little activity. Search for floodSchool.

After reading the book, I’m a bit confused on your comments about poorly written (I found it to be very well written), and missing some of the items [another commenter] outlined.
1. camp fremont more information on it. – Pages 54, 55, 56, 57
2.Menlo circus club – Page 27
3.menlo park cemetery – Page 30
7.menlo park historical association – It looks like the majority of the photos are from the MP Historical Association.
8.brief history on bay road and that part of Menlo park. – The Flood Estate, now Lindenwood, encompassed a large area within the Bay Road region. Pages 17,18 & 19.

I have a fairly extensive collection of Arcadia books and know the authors are limited by the photos they can find and number of images they are allowed. These books are great snapshots of a town’s history, but cannot possibly tell the entire story.

It only has one page on the cemetery and not that great of a description. Same goes for Menlo circus club.

Plus how about the Kavanaugh family the house on bay road the church oicw now jobtrain. We get A page on facebook but nothing on the Kavanaugh’s and what they did for Menlo park. I think the book could of been better written. Yes Menlo historical society did provide a lot of the pictures but there not much on the history of the society. Also for the authors not to contact me regarding the book and too see if they want to revise it or put out a second edition too me is wrong.

It only has one page on the cemetery and not that great of a description. Same goes for Menlo circus club.

Plus how about the Kavanaugh family the house on bay road the church oicw now jobtrain. We get A page on facebook but nothing on the Kavanaugh’s and what they did for Menlo park. I think the book could of been better written. Yes Menlo historical society did provide a lot of the pictures but there not much on the history of the society.

I was surprised to realize that I recognized Mrs. Becker in the picture. My mother, Margaret Snowden started working with her about 1952 and succeeded her as city clerk, on Mrs. Becker’s retirement. That City Hall was tiny–two offices on one side and restrooms and a storage room on the other.

I have vivid recall of you mother and father. Am still a Willow’s resident.
Would appreciate contact with you