Yesterday, we got reports that a deer was roaming around near the intersection of San Mateo Drive and Middle Avenue in Menlo Park. We reached out and got this report from John Patun, who was at his sister’s house at the time. 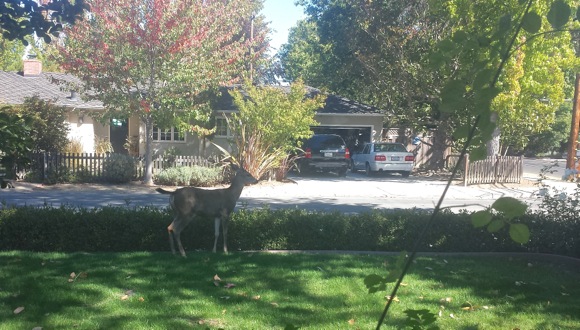 “I called the Animal Rescue & Control and The Humane Society, who typically deal with injured animals or those needing rehabilitation. They said they will look into what they can do and suggested I also call the local police department.

“I reported the matter to the police, who were very helpful, thanked me for calling. and said they will look into the matter right away.

“I truly hope that he finds his way back to a safe location, such as the San Francisquito Creek, or even better the foothills. If you hear any updates, please let us know.”

As John asked: any one else get visited by the deer yesterday?