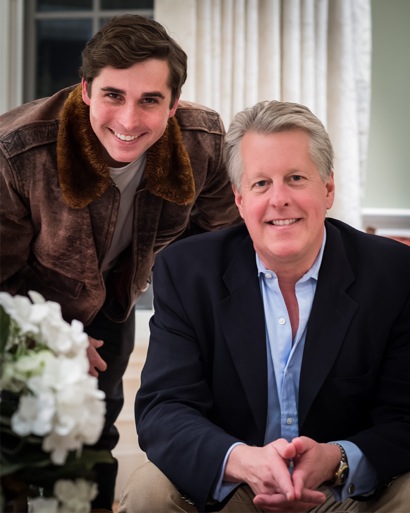 Menlo Park resident Bruce Bower and his business partner Cole Paterson have come up with a web and mobile-based service that they say will simplify your holidays. Got your attention?

It’s called WyshMe, and what it does is allow you to create a wish list and share it with your friends and family. Not just a wish list at one place, say Nordstrom’s or Amazon, but across the 200 merchants that they work with. In the process, you can connect with friends, and share suggestions, requests, and conversations about products.

Their partnership started around two years ago. Bruce, a lawyer by trade, worked for Wilson Sonsini, initially as a litigator but then increasingly around more business issues. A client hired him as a general counsel, and he continued to focus on business during his tenure at that company.

“After a while, I was doing just a little law and more and more business,” said Bruce, who holds the title of Co-founder and Chairman. “WyshMe is the first startup that I founded from the beginning.”

With what he described as a “white space business model,” he sought to find someone who could develop his idea technically. “A friend of mine is a professor at the Design School at Stanford, and he introduced me to Cole, a recent graduate who’d worked on SnapChat when it was a Stanford project.”

Co-founder Cole, who serves as the CEO and oversees product development, explains that he enrolled at Stanford thinking he was going to be an electrical engineer, but gravitated to design, which he describes as “special at Stanford, going beyond just problem solving.”

They launched the first iteration of WyshMe late last year, not in time for the holidays. They’ve since redesigned the web experience and launched a mobile version. When someone buys a product from their service, they are paid as an affiliate by the merchant. The target customers are teens and moms.

“We did a lot of interviewing between iterations, and one of the big insights we had was the passion people have for collaboration,” said Bruce. “Almost everything is better when it’s a team sport.

“In the end, we, of course, want to make money. But for now I’d rather have people interacting and learn how to meet their needs, what they’re passionate about. And offer a service that provides transparency with friends.”

The mention of transparency made us curious about what Bruce and Cole are passionate about, outside of the development of WyshMe. Cole told us he does oil painting and has done some musical theater. Bruce discovered swimming with the Menlo Masters and has gone from barely able to swim a few laps to consistently winning open water competitions in his age group.

As for WyshMe, they’re running lean and exploring all options as they learn what customers want during the busy holiday gift buying season.