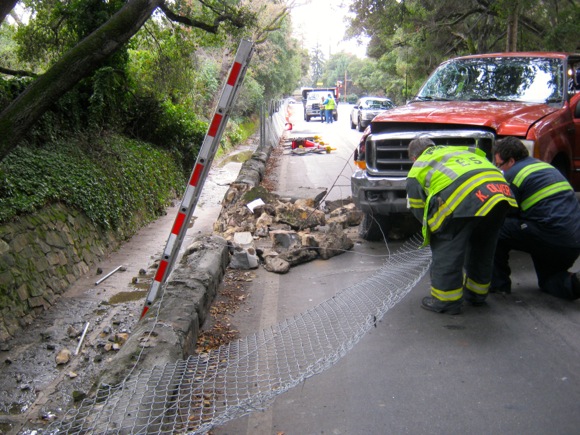 Menlo Park Firefighters worked to disentangle a pickup truck that had jumped the curb and broke through the barrier fencing ending up on its side in the Marsh Road/Atherton channel Sunday morning (12/20/15).

The driver got out of the truck and was arrested by the Atherton police.

Fire Chief Schapelhouman said: “This is becoming a regular occurrence, and it’s going to end badly one of these times. I’ve seen what the channel looks like when it is full of rushing water, and I’m concerned about not only the safety of the public but our firefighters who will attempt to rescue people in harms way despite the danger to themselves.

“I’ll be talking to the Town of Atherton about the channel again. I know they are trying to make improvements but have been precluded from doing so.”

maybe these drivers shouldn’t be using their phones while driving and drinking their coffee latte’s!