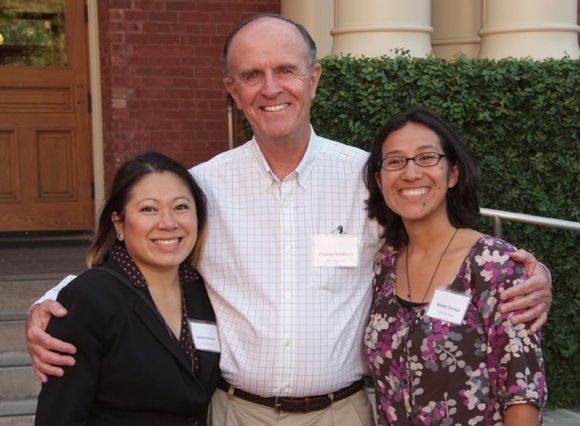 Menlo Park resident Charles Schmuck has been honored with a regional Jefferson Award for Public Service and will be featured on KPIX-TV’s “The 6:10 News” and KCBS radio on December 30th.

Charles is being recognized for his role in establishing the Peninsula College Fund, a 10-year-old non-profit organization dedicated to helping local, low-income, first-generation college students graduate from four-year colleges and universities.

He was chosen for his “uncommon dedication to ensuring the success of a new generation of scholars – not just by providing them with financial assistance, but with the support they need to thrive,” according to the Bay Area Jefferson Awards Steering Committee.

PCF offers a comprehensive program of scholarships, one-on-one mentoring, summer internships, and workshops, which has helped its scholars achieve an impressive graduation rate. Of the 136 students who have received scholarships to date, over 90% have either graduated or are on their way to graduation.

“I am humbled and honored to receive the Jefferson Award, one of the most respected in the non-profit arena in the Bay Area,” said Charles. “This award recognizes the hard work of the various executive directors, staff members, mentors, volunteers, and especially our very deserving students, over the first 10 years of our existence. All of us at PCF remain dedicated to our founding mission of helping change lives, one generation at a time.”

The Jefferson Awards for Public Service, the country’s most prestigious and longest- standing public service awards, are given at both local and national levels. Local winners are “ordinary people who do extraordinary things without expectation of recognition”. It is the goal of the Jefferson Awards to inspire others to become involved in community and public service.

For 10 years, KPIX, the media partner of the Jefferson Awards, has been profiling “Bay Area Award winners’ stories of the quiet heroes who show how one person can make a difference in community.” All 2015 regional winners will be recognized at a medal ceremony on January 19 at the Herbst Theater, San Francisco. From this group, the local steering committee will select five “Silver Medal Winners,” whose names are then passed on to the national Jefferson Awards organization for consideration for a national award.

I congratulate Mr. Charles Schmuck for the Regional Jefferson Award for Public Services, thank you for the delightful news.Tehran ,Nasser Pouyan

I wish you and Mr. C.Schmuck and your friend a much success in the New Year.

So well deserved, Charles- you have left a legacy that will positively affect the lives of all the families and subsequent generations of these amazing young scholars.