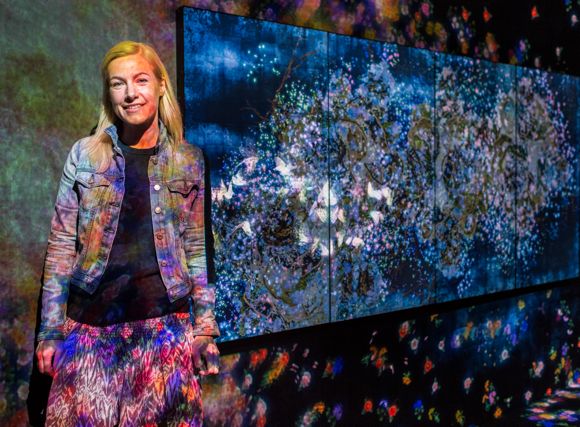 We know we’ll get some arguments in favor of what puts money in the City’s coffers. Or even the day you brought your firstborn home from the hospital.

But we can’t think of anything more appealing, fun and exciting ever to hit Menlo Park than the two exhibits, Living Digital Space and Future Parks, currently on display at 300 El Camino Real. Or for that matter, anything that would make better use of an abandoned auto dealership (that also spent time as Tesla’s first production site).

We were lucky enough to get a guided tour by Elizabeth Sullivan, a new resident of Menlo Park who serves as president of Pace Palo Alto, a gallery that will be opening in our neighboring city’s downtown at the end of April, as well as director of Pace Art + Technology.

Elizabeth has been with Pace for 17 years, but says this was “the biggest undertaking in my career with over 20,000 feet of space.”

She explained that Pace Art + Technology was founded by Pace President Marc Glimcher and is dedicated to collaboration with interdisciplinary art groups, collectives and studios whose works explore the confluence of art and technology. 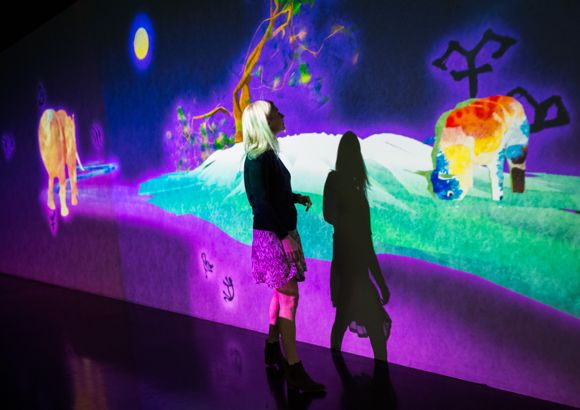 “After establishing a base in Menlo Park, it became clear that this would be an ideal venue in which to examine the new approach of the emerging art and technology collectives and how to best share their work with the public,” Glimcher said in a press release announcing the new program last December.

Visitors to the gallery, which is more akin to a museum, will find that the works are interactive. Elizabeth showed us one example in the Future Parks section, which is designed to appeal, in particular, to children.

“It’s called Sketch Aquarium,” she explained. “You pick out of a fish and take it over to a table to color it. It gets scanned and comes alive in the aquarium.”

She also placed her hand on a character in Story of the Time When Gods were Still Everywhere, and the world contained in those characters opens up and the story begins (photo above middle).

Founded in 2001 in Tokyo by Toshiyuki Inoko, teamLab is “an interdisciplinary group of ultra-technologists whose collaborative practice seeks to navigate the confluence of art, technology, design, and the natural world. It’s rooted in the tradition of ancient Japanese art and contemporary forms of anime.”

If all of that sounds complicated, the resulting 20 works on display provoke amazement and wonder, a true feast for the senses that can be further enhanced by downloading the companion app.

The exhibit is scheduled to run through July 1, and it’s Elizabeth’s hope that school groups and corporate teams as well as individual viewers come for a visit. There is also an opportunity for non-profits to host fundraisers at the space.

Living Digital Space and Future Parks is open Tuesday through Sunday from 11:00 am to 7:00 pm. Tickets, ranging in price from $7 to $20, are available in advance online.

Photos by Irene Searles: top – Elizabeth is pictured in front of Flowers and People Cannot be Controlled and Live Together, hence the flowers all over her clothing and face; middle – the character Elizabeth touches floating around Story of the Time When Gods were Still Everywhere becomes a cow