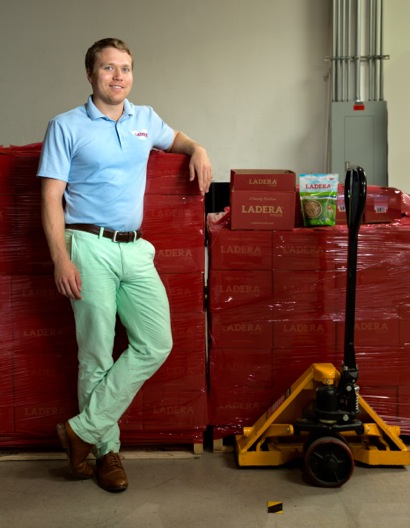 Brian Tetrud, Founder of Ladera Granola stand next to pallets of his products that are bound for WHole Foods. Photographed by Scott R. Kline for InMenlo in San Mateo, CA.

Brian Tetrud is a Ladera born and raised guy who grew up eating his mother’s homemade granola. So it’s no surprise that he’s named his company Ladera Foods and the first product was granola based on her recipe, now called Almond Pecan Granola.

“She still bakes her own granola,” he says. “I made it for roommates when I went away to college, and everyone who tries it really likes it. So it made sense that I try to expand beyond our family.”

The Menlo-Atherton High School grad returned to the Bay Area after attending college at Ithaca and launched his company in July, 2011. He credits Kevin Bianchini, owner of the Ladera market of the same name, as being particularly helpful during his days as a “one man show, making, delivering and marketing” the first granola.

Two new granolas have been added to the Ladera Foods line: Chocolate Almond and Pumpkin Quinoa. They are available at a number of stores besides Bianchini’s, including Country Sun, Bob’s Country Corner, Roberts, Draegers and both Menlo Park Safeway locations.

Helping grow the company are a number of Brian’s classmates from La Entrada and M-A. “Andrew Stern runs R&D. Dylan Torres was my next-door neighbor growing up, and he’s our number one sales guy. And Courtney Scheuch, who I went to M-A with, does a terrific job with accounting and HR.”

The next step for Ladera Foods will be to move beyond granola. “We’re looking at other types of breakfast items,” explains Brian. “But our mission will remain the same — healthy foods that taste good!”

I’m so happy to hear the story. I never liked granola until I tried Ladera. Since I tried it at one of their tastings, I’ve been buying it ever since, keep up the good work!

I never liked granola until I tried Ladera at a sampling. You go guys!

WOW ~ what memories came up for me. When I was 16, my dad worked as a butcher at what was then Ladera Market and we lived off of Alpine Road on Bishop Lane. Lonnnnng time ago.