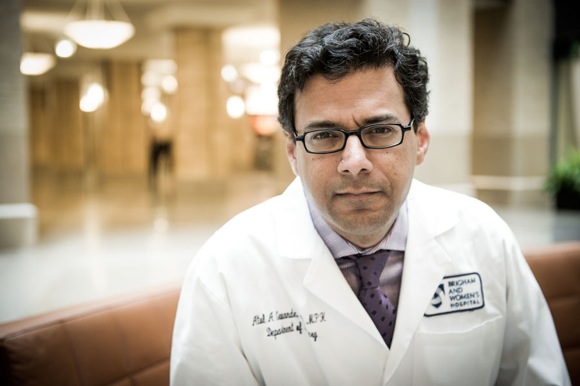 A PBS film adapted from the best-selling book Being Mortal, by physician Atul Gawande, M.D. (pictured), will be shown in Menlo Park at 7:00 pm on Friday, June 17, 2016 as part of a nationwide dialogue about individual goals for end-of-life.

The screening will be at Trinity Church (330 Ravenswood Ave.). After the film, audience members can participate in a guided conversation on how to take concrete steps to identify and communicate wishes about end-of-life goals and preferences.

This event is free and open to the public. Reservations are required and can be made online.

“This film illustrates the importance of talking with family members about their hopes and dreams around end-of-life,” said Lisa Deal, Chief Clinical Officer for Mission Hospice & Home Care. “We hope to inspire people to do this, by talking about what we might like for our lives — up until the very end.

Being Mortal investigates the practice of caring for the dying and explores the relationships between patients and their doctors. The film sheds light on how a medical system focused on a cure often leaves out the sensitive conversations that need to happen so a patient’s true wishes can be known and honored at the end.

“The work of Dr. Gawande creates a wonderful opportunity to open up an important conversation within our community and within families,” said the Rev. Elizabeth Riley of Trinity Church. “As difficult as it is to talk about the end of life, there is also a deep yearning to find ways to talk about it, and Being Mortal gives people a great place to start.”

California’s End of Life Option Act went into effect on June 9. The law requires two doctors to agree, before prescribing life-ending medications, that a patient has six months or less to live. Patients must be able to swallow the medication themselves and must affirm in writing, 48 hours before taking the medication, that they will do so.

“I think there will be more public discourse [about end of life planning] when this law goes into effect,” said Lisa. “It will get attention from people and groups on both sides of the issue. Our assumption is that very few people will actually take advantage of it.

“Another development is that Medicare has changed. Physicians now have a billing code associated with end of life discussions with patients.”

The June 17 event is designed to prompt these conversations. The free screening is sponsored by Trinity Church and Mission Hospice & Home Care, who were selected to partner with the Hospice Foundation of America in this nationwide effort.