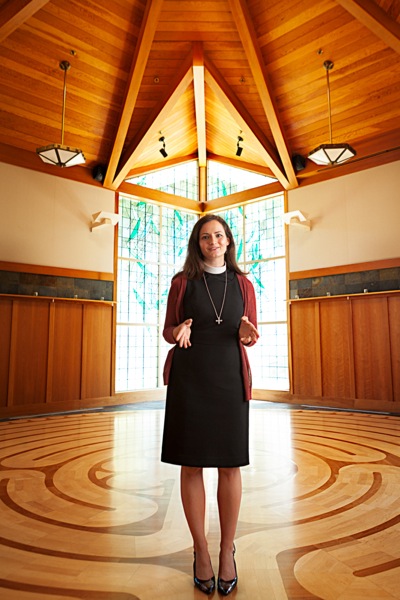 Elizabeth Riley, a newly-ordained priest in the Episcopal church and associate rector at Trinity Church in Menlo Park doesn’t fit  stereotypes. While she grew up in Alaska and continues to love nature, she’s petite and pretty rather than athletic and rugged.  And at 26, she looks more like a teenager than working adult, although she admits “the collar helps age me a bit.”

Elizabeth once hoped to become a dancer. But her short stature (5′ 2″) got in the way.”I grew up doing ballet, jazz and hip hop.” she said  during an interview in Trinity’s chapel. “When I came to California to go to college [St. Mary’s], I discovered social dancing and took up East Coast Lindy Hop along with Argentine tango.

“Unfortunately going to seminary [at Church Divinity School of the Pacific] put a crimp in my social dancing, which tends to be a late night activity. At seminary, my mornings got earlier.”

Except during a period of early childhood when her parents considered themselves “conscious humanists”, religion has played an important part in her life. Her mother was Roman Catholic and Elizabeth chose to be baptized and take her first communion in that church. Her father was drawn to Judaism, as was Elizabeth’s sister. “We became an interfaith household, and it worked,” she said.

After her parents separated, Elizabeth found herself church shopping. “When I was 11, I slept over at a friend’s house and fell in love with the Episcopal church.” 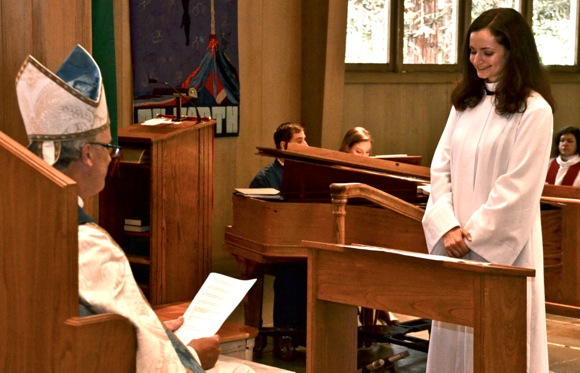 She was called to ordained ministry at a young age. She explains: “When I was 15, I was elected a full voting delegate to the diocesan convention, not just a youth delegate. I enjoyed the opportunities of leadership in the church even at that young age. And I embraced the theology that when you are confirmed, you are a full adult in the church.

“At the convention I became intrigued with both church governance and politics. There would be arguing and debate but then everyone would come together at the end of the day for compline [an evening worship service]. I experienced inclusion and love, and love of God and Christ. It was the transcendent nature of being a part of a Christian community.

“On the last day of the convention, I said to my rector that I felt called to the priesthood. I don’t think I entirely knew what I was saying but I do think I knew from that moment that I wanted to work in the church.

“I spent the next 11 years in the discernment process and was fortunate enough to have the support of both my home parish and Bishop.”

Elizabeth was ordained to the priesthood at Trinity on August 17, an event presided over by the Right Rev. Mark Lattime, the Bishop of Alaska. She had moved to Menlo Park with her husband Scott a few months earlier.

“We both love Menlo Park because it’s so flat, making it a perfect place to walk and bike,” she said. “Plus it’s close to San Francisco and San Jose where we have family. We couldn’t be happier living here!”

Portrait of the Rev. Elizabeth Riley by Scott R. Kline; photo of Elizabeth at ordination by Annalise Deal

This was truly a “God Thing” from the very beginning…

She is so very smart and nice looking!