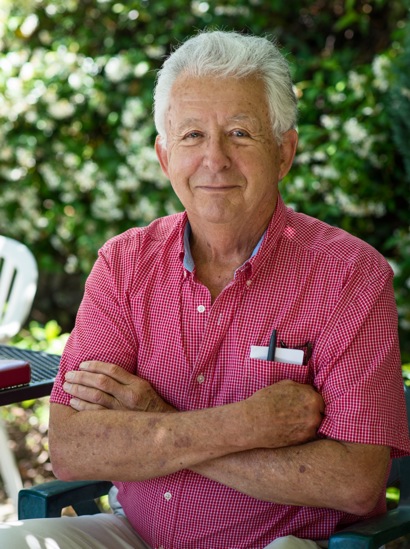 For much of his life, author Kirby Wilkins has lived on Santa Cruz Avenue in Menlo Park in the home his mother first moved into in 1947. He’s seen happiness there as well as what he describes as “trauma,” particularly after the birth of his son Jake in 1992 when he was 55 years old.

At the time, Kirby had already authored two novels, King Season and Quantum Web and a book of short stories, Vanishing. But after Jake, who has cerebral palsy, was born, Kirby says “fiction sort of went out the door.”

“I never thought about writing about Jake,” he says. “But I did take little notes which morphed into poems.

“Then his mother and I split up and I retired [from teaching at Cabrillo College] in 1998. I’d never been around a young child in my life, and here I was an older father with a son who is disabled.

“A friend of mine liked my little pieces, and a friend of his liked them very much. I found a publisher [Lychgate Press] and Life With Jake was published last summer. It’s about both of us, but it’s more about me. I had to grow up. I’m better than I was before Jake. My son taught me about love.”

Like his father, Jake attended Menl0-Atherton High School as well as all the Menlo Park elementary schools, which his father has high praise for. He’s now 23 and spends most of the time with his father. They work together as much as six hours a day on structured activities and are involved in the development of a community for disabled adults in Santa Cruz.

I met Kirby when he was travelling in Australia in 1963. We corresponded for a few years and his letters were so interesting that I kept them. I found them in a file that had not been looked at for quite a while and I have copied them. Would he like to get in touch and have his letters returned, or maybe just say hello.
Ray Cavenagh

I’ve sent this note on to Kirby – Linda, editor of InMenlo.com