Suburban Park residents gather for summer cocktail party, one of a series of yearlong events 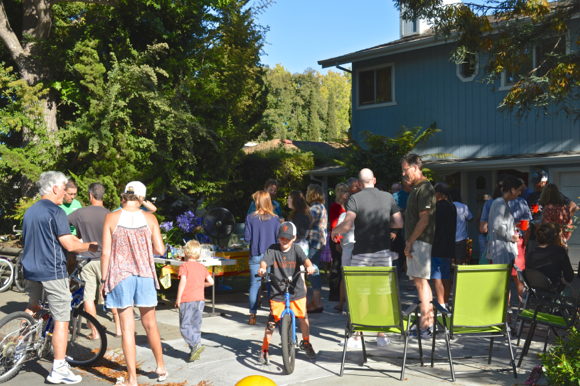 With the jingle of bike bells mixing with children’s yells, around 50 Suburban Park residents gathered in Jill Olson’s driveway for a neighborhood summer cocktail party last Saturday night. As the adults mingled amidmidst a multitude appetizers and drinks contributed by attendees, the youth played in the street and eventually broke out the water balloons provide by Susan McLeod, to much laughter and a little mayhem.

The summer social was part of the year-round calendar of events organized by the Suburban Park neighborhood board, which also puts on a July 4th parade, a Halloween parade, a street dance, a picnic in the ajoining Flood park, an Easter egg hunt, and an appearance by Saint Nicholas. The events are organized at the monthly meetings of the volunteer board that’s been convening since the 1950’-60’s. Funds come from voluntary neighborhood dues. 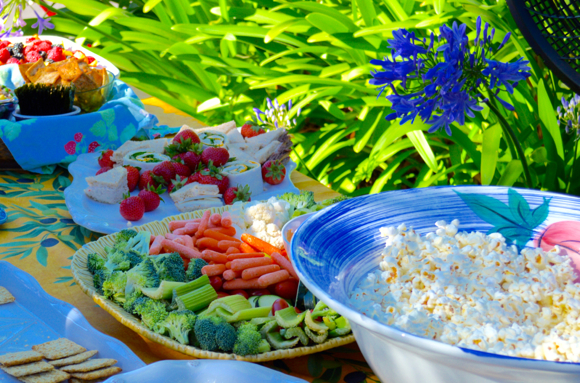 “Teacher” Susan Davis, a former child development specialist and educator, told us she’s resided in Menlo park for 30 years. She felt the neighborhood’s “sense of community” helped the development of young kids in the area who could “run around in the street and explore.”

Valerie Rice, mother of two, pointed to events like the cocktail party as helping to develop this “sense of community” and allowing her family to know their neighbors.

Travis Davis, who has served as treasurer for the Suburban Park Association for 10 years, said the neighborhood, had that feeling of “old time America” when kids and parents “went out and played with [their] neighbors.” He mentioned that there’s been an influx of young families to Suburban Park in recent years, partly due to tech jobs, with Facebook just three miles away.

One such recent addition was a young father, who declined to give his name but mentioned his family had only moved in during the last couple of months. He cited the Menlo Park school district as a factor in the choice to move to the neighborhood. However, now that they’d moved in, he said he was pleasantly surprised by the “Leave It to Beaver…kids can go run and play” vibe of the neighborhood.

The event ran past the scheduled 7:00 pm stop time, and the conversation broke only briefly at the occasional crash of a bike on asphalt and ensuing application of band-aid.

The board will host a street dance in September. For more information about Suburban Park events, reach out to co-presidents, Lusi Chien and Kevin Chien at ssubparkboard@gmail.com.