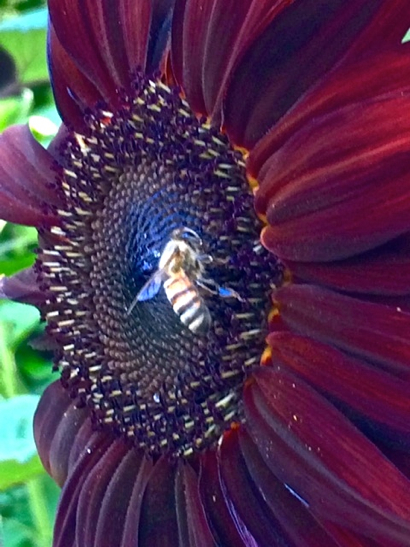 Feeling a bit lonely when her daughter, Leah, left for a year-long stay in Africa last year, Menlo Park resident and physical therapist Robin Tobias planted some sunflowers. She found them to be a cheery addition to her garden.

This year, she doubled down, which is a bit of an understatement. “I planted seeds in a little tray, and when they were about two inches high, a friend and I transferred them to one of my garden beds,” said Robin. “And they all came up — all 110 of them!”

Robin bought her seeds at Wegman’s in Redwood City, buying every variety she could find. They include Chocolate Cherry, Cinnamon Sun, Velvety Crimson, among many others. “My favorite is Honey Bears,” said Robin. “They’re not as tall, only growing to two feet, so they have their own section.”

Robin enjoys watching the flowers turn their FACES as the sun moves. “They are so happy!” she said. “And so good for people whose hearts are sad.”