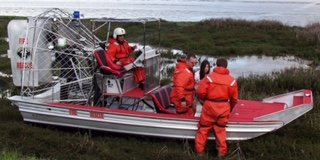 Menlo Park Firefighters suspended search efforts around noon yesterday (7/21) when they located a male body just south of Cooley Landing in the waters of the San Francisco Bay.

Firefighters first responded to the reports of an individual who had abandoned his vehicle on the center span of the Dumbarton Bridge on Saturday, July 16, at 6.56 pm. Witnesses stated they had seen a man climb over the railing and jump into the Bay.

The Fire District’s specialized flat bottomed Air Boat (of the type pictured) was immediately deployed and was joined by additional deep water craft from the Redwood City, Fremont and Alameda County Fire Departments along with a Coast Guard vessel and helicopter.

Battalion Chief Mike Shaffer with the Fire District along with Coast Guard Mobile 3 coordinated a methodical large area search of the Bay based upon tidal conditions, current and winds. The search was suspended at nightfall, and the mission was re-classified to a recovery operation.

On Monday, July 18, the Fire District’s Air Boat was redeployed for a generalized search and recovery mission south of the Dumbarton Bridge. The highly specialized Everglades style, flat bottomed craft is specifically designed for shallow water and muddy conditions allowing it to gain access to locations most other watercraft could never get to at low or minus tide in the southern end of the Bay.

Yesterday, the Fire District’s Air Boat began its search at 9:00 am and was joined by the Redwood City Fire Department’s deep water craft and a Coast Guard Helicopter. The victim’s identity has not been released.

Finally, the MPFD found something!!!

I wonder how much help the Sheriff’s Department was?