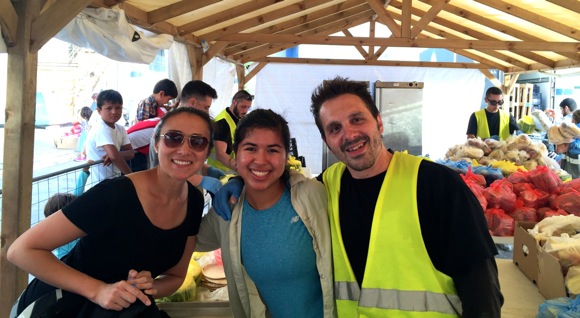 We sat down with Stacy Ishigaki, who teaches at Eastside College Preparatory School, and Menlo School student Lauren Chan. This summer the pair volunteered in Greece for five weeks where they worked with Syrian and other refugees..

InMenlo: So how did this trip come about Lauren?

Lauren: Through a school research grant, from my school [and the HAND foundation}. I’d decided to apply for a research grant, which was about $4,000, and was really interested in learning more about the refugee crisis. The issue was first brought to my attention through our church, Spark.

A few months after that, Stacy and I were connected through our pastor, Danielle Parish, and we found out we were both interested in going. When I found out I got the grant, we teamed up and decided to embark on the five-week journey together, even though we hadn’t known each other before that.

InMenlo: What sparked your interest in this, Stacy?

Stacy: Many of us had heard about [the crisis] in the news but pastor Danielle is really insistent about preaching that these [refugees] are our neighbors and this [issue] is something we can do something about, not just a sad story to talk about. Also, at the school I teach at, the junior class was doing a research project, and the topic this year was the refugee crisis. As I sat in on this class I was learning more about how complex the issue is.

InMenlo: So walk me through what happened.

Lauren: Well, we did a lot of research and prep beforehand trying to find out what nonprofits to work with. When we got there we realized we had to modify our plans as the situation was changing so rapidly. We landed in Piraeus Port, which is the main port of Athens, and found out the organization we thought we were going to volunteer with wasn’t organized.

So we volunteered at a different location, the abandoned Alenico Airport. There we worked with the Danish Refugee Council (DRC) which is a really amazing organization that’s partners with the United Nations High Commissioner for Refugees (UNHCR). We did food and clothing distribution.

InMenlo: Can you tell me about the camps you visited?

Stacy: We spent time at three camps, and briefly visited a 4th and drove past a 5th.

In Athens we went to Piraeus Port E1, which was an informal camp — families in tents on the pavement — but UNHCR had started delivering food, and there were showers in portables. People didn’t have papers to show they were part of that camp. It was slowly being cleared while we were in Athens, with people being taken to larger, formal camps inland.

Elliniko, an abandoned airport, and Olympic stadiums were semi-permanent. We think it started with people just camping there and then turned into a government-run camp. People stayed in tents in and around the abandoned buildings. We saw port-o-potties and weren’t sure of shower facilities.  People had papers so NGOs [non-governmental organizations] were doing orderly food and clothing distribution. People seemed to be able to take the tram into the city or walk to the beach. The land is prime real estate and was recently sold, so it won’t be a permanent location.

Kara Tepe, which is on Levos, is more permanent with UNHCR houses arranged in clear rows with “addresses” and buildings with bathrooms and showers, water fountains, portable classrooms and NGO/government offices.  There were many NGOs, including ones that ran a health clinic, a women’s safe zone, clothing and distribution, English and math classes, hygiene workshops, children’s programs, and movie nights.

InMenlo: How did the kids you met talk about the journey?

Stacy: We didn’t probe too much. Some mentioned that they’d crossed the sea. “I haven’t been home for six months,” explained one. They’d been here for two months, so that meant they had been traveling for four months! As someone who works with kids and child development, I could really see the evidence of trauma. And such need for attention.

InMenlo: What do you think the American media misses when covering the crisis?

Lauren: Just how diverse the population is. It’s not only Syrian. Afghanis have been coming for years. Syrians are at most under 50%. Many of them seem to be middle class, have Facebook, were cosmopolitan.

Stacy: The generosity of the Greek people. Lesbos is an island of under 50,000 and their tourism economy has been destroyed by this. Yet they were so hospitable and warm.

InMenlo: How did this trip change you personally?

Lauren: Really understanding the diversity. I had to change my blog from “First-hand studying “Syrian Refugee Crisis” to “the Refugee crisis” no Syria. Additionally, these are people with skills. They are bright and trained.

Stacy: Yes, they are in need of help, but they are not helpless. I realized how much privilege a U.S. passport affords me. It makes me think how can I leverage that privilege to help shift structures of power.

Editor’s note: Lauren kept a blog about her preparation and experiences at the camps.