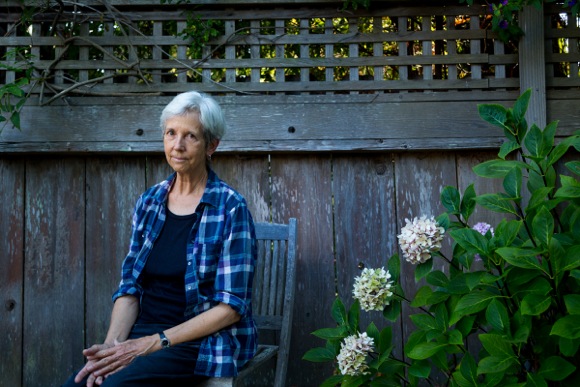 While author Jeanne DuPrau views herself as “always a writer,” she didn’t write fiction until she was in her 40s and wrote the best-selling The City of Ember.

“I was a big reader as a child — C.S. Lewis, The Borrowers, Mary Poppins, that kind of thing,” she said sitting in the garden of the Menlo Park home she shares with her small dog. “But I didn’t write much fiction because I never felt good about my efforts.

“The summer I graduated from high school was clouded by the threat of nuclear war what with the Bay of Pigs. People were building bomb shelters in their backyards.

“I continued to think about these events as the decades passed. So, in some ways Ember is about this, a city that functions as a bomb shelter for the human race.”

Jeanne followed the The City of Ember with three more Ember books, all of which achieved critical success and continue to sell today. “They made me famous,” she smiled.

We were curious as to what prompted her to sit down and write the Ember series after many years of writing non-fiction. Her reply was more practical than inspirational: “I worked at Apple from 1982-89, and the Macintosh changed my life.  If I’d had to write my first drafts by hand and then type them on the typewriter (as I did with my first non-fiction book), I’m not sure I would have had the stamina for all those novels!”

While the Ember books are categorized as science fiction and are geared for ages 10 and up, Jeanne thinks of the books as “speculative fiction” and her audience as very broad-based. “I get emails from every age, although less from teens,” she said. Her fan base further broadened  when The City of Ember was made into a movie starring Bill Murray.

What’s next for Jeanne?

“After my final Ember book was published  in 2010, I was exhausted and written out. But now that I’m a few years out, I’m back working on one book — also set in the future — that I’ve been trying to write without success. I’m a little more hopeful that I can get it done now.”

Jeanne also enjoys “the wonderful days that I don’t have anything to do” where she can garden or play piano and practice newly-honed drawing skills. “Of course, reading is still my number one pastime, followed by walking my dog!”