Cause of structure fire on Grayson Court remains illusive, damage to home is extensive 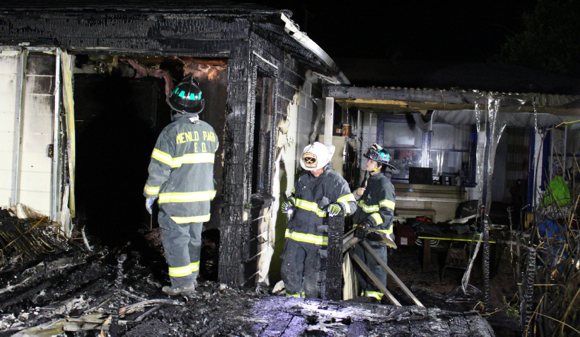 The cause of a structure fire early Sunday evening that caused $300,000 in damage to a home and day care center on Grayson Court in Menlo Park is still undetermined.

When Menlo Park Fire arrived, they found that a covered patio was fully engulfed, and the fire was spreading into the house. No one was home at the time of the fire, but the home is occupied by two adults, two children, a dog and rabbits.

Firefighters limited interior fire damage to several bedrooms adjoining the enclosed patio, but smoke damage was throughout the structure with some water damage. The enclosed patio was completely destroyed. The fire was brought under control by 6:25 pm, with firefighters spending several more hours overhauling the fire to make sure it was completely out while three fire investigators attempted to determine the cause and origin of the blaze.

“The light weight exterior patio structure was so destroyed that finding the exact origin was impossible,” said Fire Marshal Jon Johnston. “After speaking to the family, fire investigators suspect new, recently installed higher wattage lighting bulbs, could be to blame but again, the destruction was so complete, an exact cause was illusive.”.

Now, this event would be a great addition to the “Clue” game! It was done by Mr. Rabbit, on the patio, with a “higher wattage light bulb”!!! Where is the light bulb fire inspector and how many does it take to unscrew a light bulb? This could end up in the cold case files!!!!