Clark Atkinson, native son of Menlo Park and man of many talents, dies at age 72 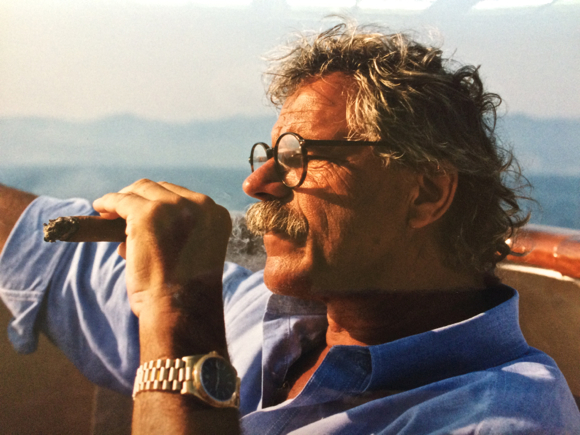 Robert “Clark” Atkinson III died unexpectedly on September 15 while tending his prize-winning fuchsias in Woodside. The cause was a heart attack; he was 72. He is survived by sister Mary Jane Atkinson and brother Bill Atkinson as well as numerous nieces and nephews, both related and “adopted.”

A celebration of his life is planned for Sunday, Oct. 2 at 3:00 pm at 2200 Ralston, Hillsborough. The Elks are also honoring him with a memorial service at the Palo Alto Lodge, 4249 El Camino Real, on Oct. 6 at 1:00 pm with a reception to follow. The public is welcome at both.

Clark was born on October 1,1943, in San Francisco, the oldest child of Roberta “Bobbie” and Robert “Bob” Clark Atkinson, Jr. In 1945, the family moved to Menlo Park where Bob developed a cul-de-sac near Hillview School called Atkinson Lane. Also living on the street were Clark’s grandparents, so for many years, Menlo was the residence of three generations of Atkinsons. 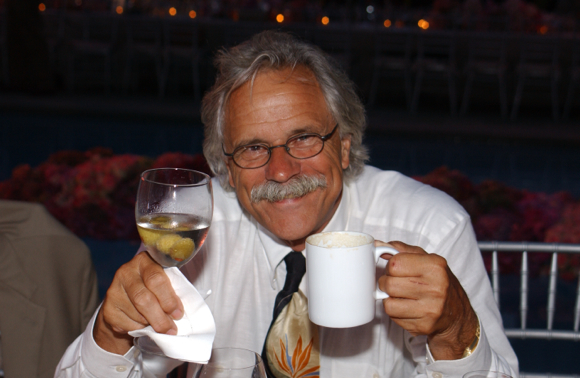 His lifelong friend Howard Berry remembers meeting Clark when they were about 10. “I lived close by, and we’d ride all over Menlo Park on our bikes, buying candy and stuff,” he said. “We also had an infamous, once-only dune buggy ride, driving it all over the hills. We were great pals.”

Clark went to the Palo Alto Military Academy rather than Menlo Park schools and attended both Menlo-Atherton and Woodside High Schools. As a young adult, he went to work as an optician in his grandfather’s optometry business in San Francisco.

Later, he worked for Hewett Marine & Industrial Supply in San Francisco, a company that supplied heavy marine equipment to waterfront projects around the world. When owner Ralph Hewett retired in 2003, Clark took over the company. Of recent note, the company supplied rigging for the cranes that helped build the new eastern span of the San Francisco Bay Bridge.

Man of multiple talents and interests 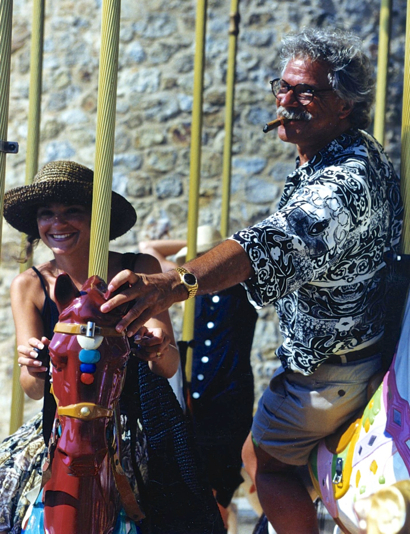 A true bon vivant if ever there was one, Clark’s talents and interests were wide ranging. In addition to cultivating fuchsias — and serving as president of the San Mateo Branch of the American Fuchsia Society — he was an accomplished craftsman who transformed homes he resided in with skill and imagination. His affinity for tools was well known as was his propensity for building bird houses.

“He loved going out and gathering scrap wood to make the bird houses,” recalled Berry. “It may have been scrap, but he was very particular about what he collected.”

He also exhibited a keen eye as a photographer. “He had cameras as far back as high school, and a dark room at his parents’ house,” said Berry. “More recently, he liked photographing nature scenes in Death Valley.” 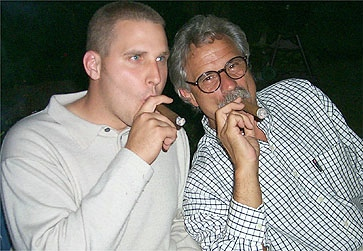 An avid car collector, Clark owned as many as six Corvettes at one point in is life and was relentless in his pursuit of adventure. “Clark eschewed convention and always encouraged me to pursue my own path in life,” recalled his godson John Getze (picture, right). “The journey is very often what’s important in life, not the destination.”

Clark was an enthusiastic joiner of clubs. Following in his father’s footsteps, he was initiated an Elk in 1967 at Palo Alto Elks Lodge #1471 and served as Exalted Ruler from 2012 to 2013 (picture, below right). 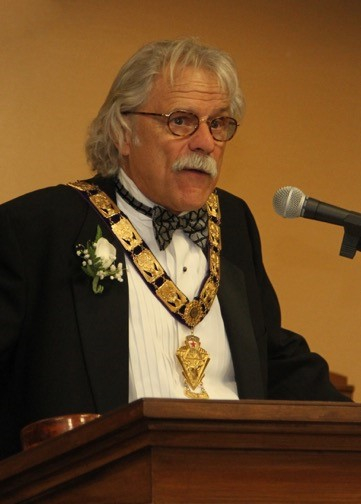 “Clark brought me into the Elks Lodge in the early 70s,” recalled Mike Davidson, who first met Clark when they were involved in the Foster City Lions Club. “He also got me involved with the Clampers. We’d go to the Camel Races in Virginia City every year and drink the city dry. One time on the way back, we stopped in Jackson and went to the National Hotel. We met some other Clampers there, and we drank them out of beer.”

A lifelong golfer, he belonged to the Peninsula Golf & Country Club in San Mateo. Recently he joined the Italian-American Social Club in Menlo Park.

Clark lived most of his life on the Peninsula, although he spent time at homes he built coast side and at Lake Tahoe.

Anyone who knew Clark knows he would want a great send off, even though, ironically, he was loathe to attend such celebrations himself. When he missed a loved one’s memorial, the surviving spouse just might find a birdhouse on his or her doorstep as a way to make amends.

For those who wish to make a donation in Clark’s memory, the family suggests the Palo Alto Elks Lodge Charity Fund (4249 El Camino Real, Palo Alto, 94306) or a charity of your choice.

Photo of Clark Atkinson as Exalted Ruler, courtesy of Palo Alto Elks; all other photos by Chris Gulker, taken over a span of years. (c) 2016

Fond memories of Clark, bike riding around town, the Sunday’s Farmer’s Market and dropping into McLoughlin’s Shoe Repair. From Cecelia Dickinson and family of the late Joe McLoughlin.

Clark was a long time buddy, golfer, cigar smoker, and martini drinking mate at PGCC, Tahoe, and other places. Although I have not seen Clark in the past few years, he will be missed, and I will always remember our good times together, including all those dinners and martinis at the big round table in the grille at PGCC. I was honored to have known Clark.
Mark Benson

Clark was generous man and an “all star” of many talents. I recall meeting him for the first time when he joined our table at the PGCC New Year party. He had not been at the Club for years but soon became a regular at his “chair” at the round table in the grill.

Spent many nights playing poker with Clark at the Baruh Liquor Company in SSF but even more memorable, were the many times we circulated among the “establishments” in the Tahoe area. Within minutes, Clark would not only know the name of all the bartenders, but the names of all the single women. His personality was extraordinary and his laughter contagious. His many years portraying “Pancho” at the Pancho Villa Tequila Masters ski races at Alpine Meadows were especially fun and memorable. He will be missed but his memory will always bring a smile and laughter to all who knew him.

This is Jay Atkinson, I am Clark’s cousin. My Dad moved to Menlo Park in 1954 just down the street from Clark when he and I were only ten. There were four Atkinson families in Menlo Park in those days, my family on Santa Cruz Avenue, and the ones on Atkinson lane, Clark’s grandfather and my Uncle, Bob Sr., Bob and Bobby and my Uncle John.

Clark and I are just three weeks apart, the two of us came of age together more than any one else in my life so I was very fond of him and am real saddened to hear of his passing. I wanted to spend as much time as I could with him, still remember his phone number from those days, hoping he would be home long enough to answer the ring amid his busy life. I grew up in Menlo Park from grade school to well into the sixties and many of my best memories are when with Clark. My Dad had a cabin in Santa Cruz where I went to College for a while, he would come and party there with me, Howie too sometimes, Clark brought the dune buggy when it was around. We had a lot of the same interests, girls and cars mostly but I couldn’t hold a candle to Clark on the female front, he was better looking and I admired the way he could charm the prettiest girls.

I went to Menlo-Atherton so had different friends to hang around with but would like to get together with Clark as much as I could. I will surely miss him yet cherish the memories.

I MET CLARK IN 1991 IN TAHOE CITY. WE BECAME GOOD FRIENDS AND WE WOULD ALWAYS GET TOGETHER WHEN HE CAME UP TO TAHOE. WE WENT OUT ON MY BOAT TO EMERALD BAY SEVERAL TIMES AND HE STAYED AT MY HOME IN TAHOE CITY, OFTEN.
MY DAUGHTERS, STEPHANIE AND CARRIE, ALWAYS CALLED HIM “UNCLE CLARK”. WE WOULD GO TO THE LOCAL WATERING HOLES AND ALWAYS HAVE “A BUCKET”. HE WAS A GREAT GUY AND A GOOD FRIEND AND WILL BE SORELY MISSED. REST IN PEACE, BRO.