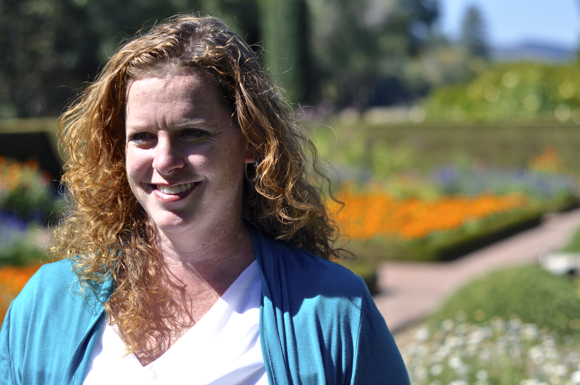 We are always interested in how and why people stumble (jump?) into their professions. So that was the first questions we asked Kara Newport, who was recently named Executive Director of Filoli.

“I was raised on a sheep farm in Ohio and attended Miami University in Oxford, Ohio for college, thinking I’d  be a liberal arts major — literature and American history,” she said. “But I took some art classes as well as botany and started turning toward the idea of becoming a landscape architect.

“One of my instructors pointed out that the only things that I could draw were plants! That led me on a science track, molecular biology, studying the DNA of plants. I loved it and was tracking to get a PhD.

“But I found myself being inside labs instead of outdoors. So through a University of Delaware program at Longwood Gardens outside of Philadelphia, I got a masters in public horticulture. That launched me onto the path of working in non-profit cultural institutions.”

Kara spent the last ten years as the Executive Director of the Daniel Stowe Botanical Gardens in Charlotte, North Carolina. Her arrival at Filoli coincides with its centennial celebration over a three-year period. “Last year was about the land, this year is about the house, and next year is about the garden,” she said. “The house is owned by the National Historic Trust and some very visionary documents have been put together that are leading us to present the house to visitors in different ways.”

While Kara has lived in the Midwest, East and South, this is the first time in the West. “I notice a bigger difference in the weather than the landscape,” she said. “Here with irrigation, you can grow almost anything.”

Kara’s hobby has a slight tie-in to the preservation of estate homes, although only coincidentally. “I cane chairs,” she said. “On the East Coast I would find them on the side of the road or rescue them from consignment stores.

“I find it really soothing, even though I like to cane quickly and actually time myself. Recently I found out that my grandfather did this for a living!”

As is the custom, the Filoli house will close to the public on October 23, reopening for Holiday Traditions from November 25 through December 3. This year, for the first time, the garden will remain open to visitors an extra week, through October 30.