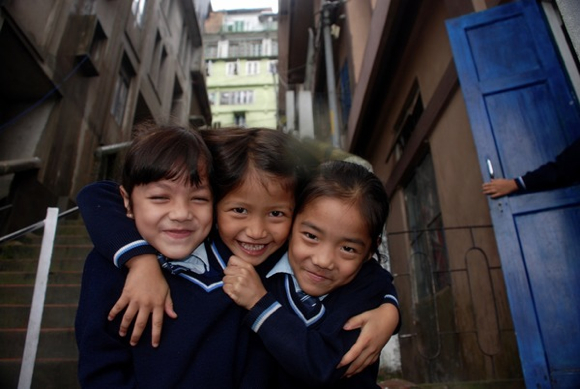 UC-Berkeley students interning with Menlo Park-based GeoHazards International recently finished fieldwork — miles of stair climbing included — in a dense city on steep ridges. Their task was to survey structural and landslide vulnerabilities at schools — and the experience was anything but textbook.

Aizawl, India is home to active earthquake faults, frequent landslides, and more than 300,000 people. Capital of Mizoram state, the city is growing fast. Improbable, precarious buildings abound, and a big earthquake could destroy thousands of them. In many places soil has already let go, exposing rock. The interns’ work complements GHI’s ongoing risk reduction efforts in Aizawl that are supported by Munich RE.

“Everything is improvised according to what people have money for and what the land allows. It’s not conventional,” said Judy Guo, a UC-Berkeley structural engineering major.

Where do schools fit into this scene? Just about anywhere. Mizoram’s literacy rate is 98.5%, the second highest in India.

“It’s great to see so many kids in school, but sad to see them where a landslide is likely, or in unsafe buildings,” said Megan Perley, a UC-Berkeley geophysics major. 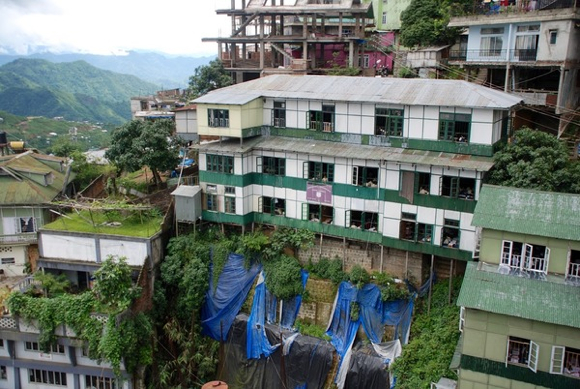 Here’s a problem: More than half of the city’s children attend crowded private schools, which parents favor because instruction is in English. A private school may use a couple of floors in a housing complex, rooms scattered on a block, or a rooftop for play. Many of these buildings were designed for housing, not for bustling schools.

Whereas public schools are designed and built with institutional safety features, there is less government oversight regarding standards in private schools. It’s uncertain how many exist. The good news is that the government intends to improve safety in all schools, regardless of ownership.

Judy and Megan joined GHI’s Rinpuii Tlau, who is based in Aizawl, to screen for vulnerabilities at 22 schools and interview administrators. They also met officials, including the Mizoram Chief Secretary, the Governor, and the Directors of Education and of Disaster Management, to understand the state’s plans to implement school safety policies.

As they interpret findings and compile recommendations, Megan and Judy have “help on tap” from GHI, UC-Berkeley professors, and academic researchers. Funded by the Heising-Simons Foundation, the GHI-UC Berkeley internships were created to engage earth science and engineering students with issues in emerging economies.

“Looking at these hillside schools, I realized that the things I learn in engineering classes can help people in very real ways,” said Judy.

“We saw many happy and excited kids who are in so much danger, and the parents may not even understand the dangers. Hopefully our work will bring change, and people will begin to look closely at the buildings and the locations” said Megan.

Photos by Megan Perley; caption for photo of school building – Tarps and masonry retaining walls at this school are an attempt to prevent water seeping into unstable slopes.