Angie Simon works and plays in a man’s world 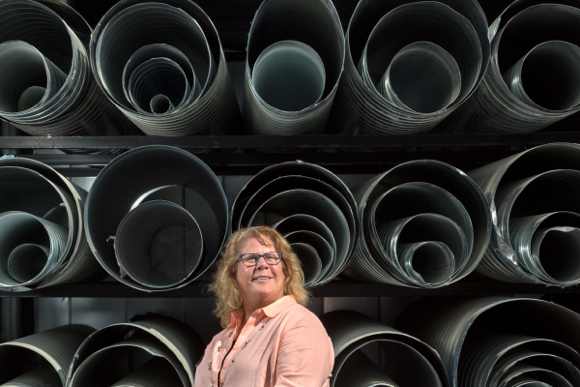 Angie Simon plays hardball. Catching and playing second, she’s one of two women in a league of around 90 guys. “I’m a solid hitter and have a good eye,” she said. “I’ve come to work with two black eyes and a broken wrist!”

Playing baseball may be her hobby, but Angie also finds herself surrounded by males in her professional life.  She’s president of Western Allied, a Menlo Park-based business that designs, builds, and maintains HVAC systems. She got into that field of work following college at Cal Poly San Luis Obispo, where she played softball all four years and majored in mechanical engineering/solar energy with a concentration in heating, ventilation and air conditioning.

Her first job out of college was at a small air conditioning company in Martinez; she stayed one year before joining Western Allied in 1987.

“I’ve really known nothing else,” she said. “And to be honest, when I started you didn’t see women project managers or women period. It’s a little better now.”

She loves her work and is proud of the leadership role she’s taken in the industry. She’s the first woman to serve on the Sheet Metal and Air Conditioning National Association (SMACNA) Executive Committee and is also co-chair of the Steering Council for Women in Construction Leadership.

Angie points out that Western Allied is one of the few companies in the industry that have stayed on this side of the Bay. “You need both yard and shop space, and it’s expensive here in Menlo Park,” she said. “But we have a wonderful location right by the Dumbarton Bridge, and we are a big employer of local people both from Menlo and East Palo Alto.

“I listen to my guys,” she added. “They teach me what I need to know.”

Not surprisingly, Angie and her husband are big baseball fans. “My husband and I went to the Giant’s fantasy camp for our honeymoon,” she said. “And we’ve been nine more times over the past 25 years.

The Giants took notice.  At one of the last games of the season, Angie and her husband were honored, along with four other couples, as fans of the year.

GREAT ARTICLE. Good to see your role in opportunities for women in what
May be one more way to become a valued team member.