The Menlo-Atherton High School Hall of Fame Committee honored athletes, coaches, and athletic boosters for their contributions to the M-A athletics program on Saturday, November 5 at Elks Lodge in Palo Alto. The ceremony included dinner for about 200 guests, presentations from Athletic Directors Paul Snow and Steven Kryger, speeches by the inductees, and final remarks from Principal Simone Rick-Kennel.

Snow’s State of the Athletic Department speech informed attendees of the changes M-A sports have undergone since they participated. Guests were happily surprised to hear that M-A’s girls wrestling team is rapidly growing and a female played on the football team last year. Snow also praised last year’s teams for winning 24 Peninsula Athletic League (PAL) titles, an impressive feat that has helped M-A retain the Commissioners Cup, which is awarded to the top overall sports program in the PAL. It marked the eighth straight year M-A has received the award, firmly establishing the school as one of the best on the peninsula. 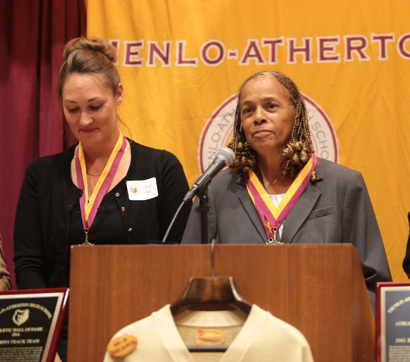 Physical Education teacher Wimberly (pictured right) was inducted into the Hall of Fame because of her incredible success coaching girls basketball for 42 years. Wimberly led the Bears to 20 PAL and four CCS (Central Coast Section) championships. She was recruited as a teacher and initially had no intention of coaching. However, she was required to coach and came to love the job, eventually becoming the first woman in California to win 300 games in girls high school basketball history.

In her speech, she reflected on the multitude of experiences she had as both a teacher and a coach. She stated, “Basketball to me is like teaching. I taught, I coached. Discipline, organization, working hard.” This method was very effective, as Wimberly was joined in the Hall of Fame by the 1991 girls basketball team. Under Wimberly’s guidance, the team won a tournament in Edmonton, Canada, an event Wimberly described as one of her most memorable moments as a coach.

When asked what the award means to her, she replied, “Wow, what an honor it is to be inducted into M-A’s Sports Hall of Fame. I guess all the hard work and the athletes that have come through M-A have made the girls program one of the top programs in the state for many, many years. And I’m just so happy that it’s finally my turn and I’m being inducted.” At the end of the night, Snow announced that the court in Ayers Gym would soon be called ‘The Coach Wimberly Court.’

The boys track team of 1960 and the boys’ water polo team of 1961 were also inducted into the Hall of Fame. Members of both teams set M-A records — some that are still unsurpassed to this day — and even went on to compete nationally and at the Olympic level. Bob Beckstrom, the spokesman for the track team, said that the players attended Friday night’s football game, a reflection of the ongoing support M-A’s athletes have for one another over the years. 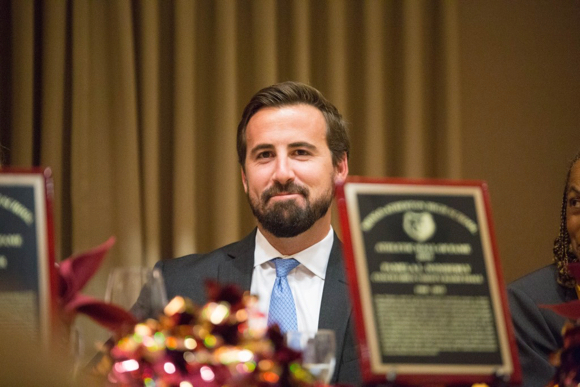 Inductee Jan Margo Henne graduated from M-A in 1965, after swimming at outside clubs due to M-A’s lack of female sports at the time. After high school, she competed in the Mexico City Olympics and won a gold, silver, and bronze medal. Henne’s success continued at Arizona State University, where she won the female collegiate-level national championship in three events.

A soccer player from the class of 1973, Hall of Fame inductee Decker was M-A’s goalie during the team’s victories in the South Peninsula Athletic League. Decker was also a walk-on starter at the University of California, Los Angeles (UCLA), where he played in two Final Four games.

Baker, class of 2000, played on M-A’s varsity softball team for four years, setting many M-A records and earning recognition from the PAL for her accomplishments at shortstop. In her speech, Baker relayed a story of failure, admitting that she refused to shake her opponents’ hands when her team lost. However, she later apologized to her opponents and high-fived each one of them, a difficult but significant memory from her athletic career.

From M-A’s graduating class of 2003, inductees Ostrander (pictured above) and Hunt played football and golf, respectively. Ostrander, who played quarterback for M-A, and later Stanford, described his love of football: “There was a mixture of thrill, excitement, and fear that I always took onto the football field.”

Hunt, a member of M-A’s first girls’ golf team, admitted that she and her teammates struggled for the first few years of golf, but their mentality helped them improve. She exclaimed, “It didn’t matter that we were horrible; we just had to fight through it.” Their determination and perseverance paid off. During Hunt’s senior year, her team won the PAL and CCS championships, and she placed first in PAL and fourth in CCS.

The Dallmars were inducted into the Hall of Fame to reward their vital role in revamping the M-A Athletic Boosters. From 2001-2004, the couple worked tirelessly to fundraise for the M-A athletics program and helped the Boosters obtain 501(c)(3) status. After their children played sports at M-A, “it was with a spirit of gratitude that [they] made it [their] happy goal to try to establish M-A’s Athletic Boosters as not just one of those associations that come and go, but a thriving and vigorous entity,” explained K. Dallmar.

The most recent M-A graduate to be inducted, Petch, wrestled at M-A from 2003-2007. Petch thanked his family members — many of whom attended the event — for their support through his wrestling career. He also praised the late Coach Ben Parks for guiding him and pushing him “to never give up.” Describing his training sessions with Parks, he remarked, “Even though no one went, he still showed up. He knew I would show up.”

Kennel concluded the evening with hopeful stories about M-A’s current student-athletes. She shared her experience watching a panel of M-A students speak to middle schoolers about M-A. Kennel said, “Demitri, Angela, and Marquise all said they found their place at M-A through a connection to athletics, all highlighted the importance of academics — do your homework, ask questions, take care of your business, and do what you’re passionate about — and all said they aspired to get college degrees.” Looking out at generations of M-A alumni, she proudly stated, “This is the face of M-A today.”