Betty Hilmer shares memories of her adobe house in Atherton 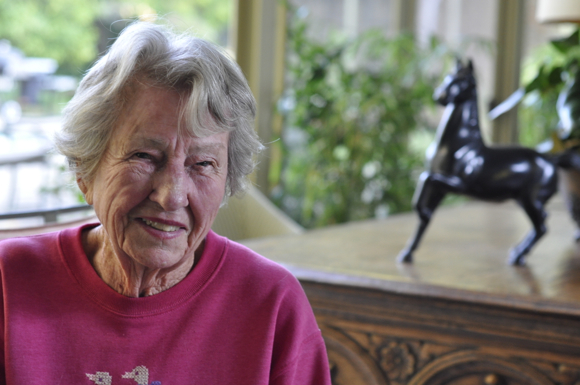 An adobe house in Atherton? Don’t think pueblo or cliff dwelling. The house that caught Robert and Betty Hilmer’s eye over 50 years ago is a mid-century modern gem.

“We happened on it by chance,” Betty recalled, sitting in the family room of a house that’s largely unchanged since they moved in in 1956. “We were living in an Eichler in Menlo Park and were working on drawings for a house we were going to build in Alpine Hills.

“Bob always liked adobe construction, and when we drove by, he stopped to see what was going on. Joe Whelan was the builder, and he showed us around. The plans for the other house stopped immediately!”

The Hilmer house was designed by Knorr-Elliot Associates; the engineer on the project was John E. Brown. An article in Architectural Record Houses of 1950s explains: “This house…uses a blank adobe wall to mask its rich, congenial, inside world…Privacy was an important part of the design. The blank wall facade isolates the lot and protects the two separate pavilions — one for sleeping, one for living and entertaining — which are set amid private gardens, a patio and a reflecting pool.

“A steel frame structure frees the walls of any load-bearing obligations so that glass can be interchanged with adobe wherever light and views of the private outdoor areas are desired.”

Walking around the front outside of the house, it seems like it’s all adobe, but inside you’re surrounded by windows. “Yes, it’s light,” chuckled Betty. “Joe [Whelan] said he could never build another like this one! In winter it’s cold, and in summer it’s hot!”

One historical note: A corner of the lot was once part of AP Giannini’s estate. “The lore is,” Betty said, “that the trees were planted by AP himself!”