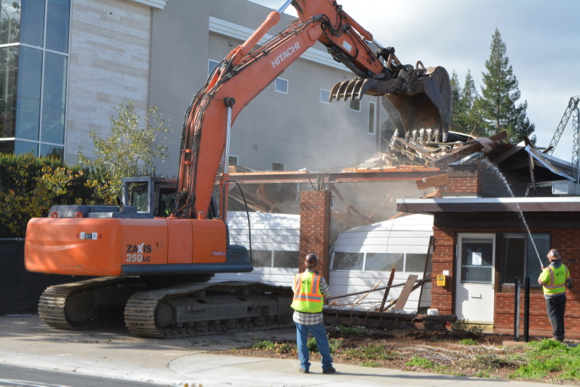 Retired Menlo Park Firefighter Dave Carr and Chief Ollie Brown stood across the street from Fire Station 6 in Menlo Park on Monday (11/28/16) as it was torn down to make way for a new modern and larger emergency fire facility, estimated to be completed by May of 2018.

Carr was assigned to Fire Station 6 located at 700 Oak Grove Avenue in downtown Menlo Park the majority of his 30-year plus career. “This was like my second home,” he said. “See that hand-painted doorbell sign, I made that. I regularly washed those windows, mopped the floors, and mowed the lawn, because we took pride in how it looked. It’s kind of hard to watch it go… I wanted to be here to see this.”

The station was 64-years-old and opened in 1953. In 2007, the Fire District determined that the stations current location best met its strategic deployment needs, but it would have to be enlarged in order to accommodate not only current operations but also a larger building that could support more personnel and apparatus, so the adjoining property behind the station was purchased in 2008.

The project stalled during the worldwide recession and only started to gain momentum again in 2014. The Fire Board recently authorized the Fire Chief Harold Schapelhouman to move forward with the rebuilding of the fire station and awarded general contractor Gonsalves and Stronck  a “not to exceed” contract for $7,547,400, as the lowest, but qualified bidder, earlier this month to rebuild a modern facility.

Fire Chief Schapelhouman said: “When we got the word that the contractor was going to start demolition today, we knew we needed to do two things: memorialize it on film and video and call Dave because nobody, and I do mean nobody, had worked there as long as ‘downtown Dave Carr’ had.”

Fire Stations become not only second homes, but people start to identify with the firefighters who regularly work at the station. “Dave knows more residents, people, obscure facts about where things are, or what has historically occurred during his career in the downtown area than anyone else. Because of the foot traffic, he was often found outside talking to passers by,” said the Chief. “I know he misses the place, the camaraderie of the fire crews and just talking to people in the neighborhood.”