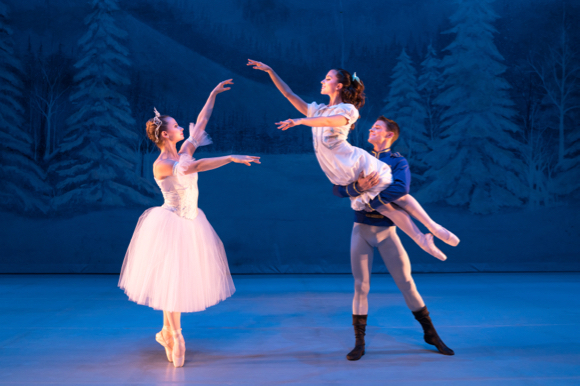 It’s a Wonderful Nutcracker will be presented by Menlowe Ballet this year on two December weekends at the Menlo-Atherton Performing Arts Center (555 Middlefield Road). Inspired by Frank Capra’s classic film, the production takes place in the 1940s and boasts all the magical trimmings of a traditional Nutcracker blended with unexpected twists and a heartwarming message about family and what’s truly meaningful about the holidays.

Menlowe’s production premiered last year and was embraced for its warmth, fun and uniqueness by enthusiastic, sold-out audiences. Choreographer and Artistic Director, Michael Lowe says, “I first watched Frank Capra’s film It’s a Wonderful Life over 40 years ago and was captivated. I felt that the movie’s tone and storyline could translate beautifully into a new kind of Nutcracker that celebrated the best of both stories.”

Lowe collaborated with Artistic Associates Julie Lowe and Sarah-Jane Measor to craft the ballet’s narrative. Set in the early 1940s in a fictional American small-town, the production honors most traditional elements that make Nutcracker a holiday favorite. However, says Lowe, “Our tale is refreshed with unique twists and a heartfelt message illustrating that while giving and receiving ‘presents’ is part of what makes the holidays wonderful, it’s the physical ‘presence’ of those who are important in our lives that imparts real and lasting meaning.”

Prior to founding Menlowe Ballet in 2011, Lowe enjoyed a performing career as a dancer, appearing in numerous traditional Nutcrackers. In Menlowe’s production, Lowe returns to the stage as Drosselmeyer, a role crafted to capture the spirit and good heart of the movie’s lead character, George Bailey, famously portrayed by Jimmy Stewart. Featured in Menlowe’s production are professional ballroom artists Chelsea Farah and Eric Koptke, as well as students from Menlowe Ballet’s official school, the Menlo Park Academy of Dance.