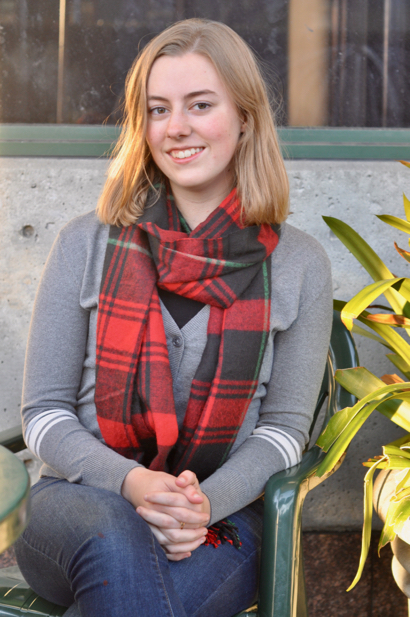 Nominated by Senator Diane Feinstein, Holly is one of only 30 high school juniors in the country who will be taking part in the Senate Page Program, equally divided by gender.

“From an individual perspective, I’m really looking forward to it,” she said. “The independence will be refreshing. This is like a mini college-experience because I’ll be living with my peers.

“From a broader perspective, politics are so important to me. Everyone needs to know what’s going on in the country. What better opportunity than to learn the workings of governmentfrom an internal perspective .”

Senator Daniel Webster appointed the first Senate page in 1829; women were first appointed in 1971. Page responsibilities include delivery of correspondence and legislative material within the Congressional Complex. Pages may also take messages for Members, prepare the Senate Chamber for session and carry bills and amendments to the desk.

Pages are housed in the Senate Page Dormitory, which is located a few blocks from the Capitol. They attend class in the early morning, studying typical junior year subjects such as mathematics, English, and social studies. A Field Studies program also ensures that Pages are exposed to many of the educational and cultural activities that Washington, D.C. offers.

The impetus for Holly applying to be a Page was an experience she had working for the M-A Chronicle. “Justice Scalia had died and I walked around campus asking for comments,” she recalled. “By and large no one knew who he was. That kind of opened my eyes to how apathetic about politics kids my age are.”

Holly learned more about the political process working on Senator Hillary Clinton’s campaign for President, working as the assistant to the San Mateo County Director. She was tasked with managing phone banks and coordinating volunteers.

She had already applied to be a Page when she met Senator Feinstein at a Clinton campaign event. “I hadn’t been accepted yet, but I went up to her and said, ‘It would be an honor to work with you!'”

Holly heads to Washington with a loftier goal ahead: She wants to be a politician when she grows up.