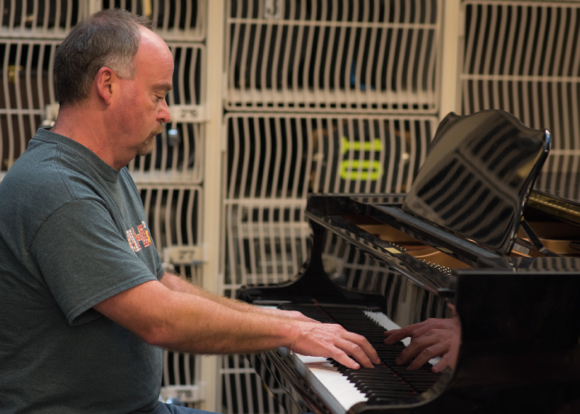 Except for a few years owning a wine store in Capitola, it’s music that’s been front and center in Menlo-Atherton High School teacher Kent Kurris’ life. He plays both the piano and the French horn and has taught at both the high school and college level, starting in 2010 at M-A, overseeing two classes of orchestra, the concert band, and two jazz bands.

His arrival on campus filled big shoes. His predecessor, music teacher Frank Moura, had been on campus for 39 years and his jazz bands had won hundreds of awards during his tenure. 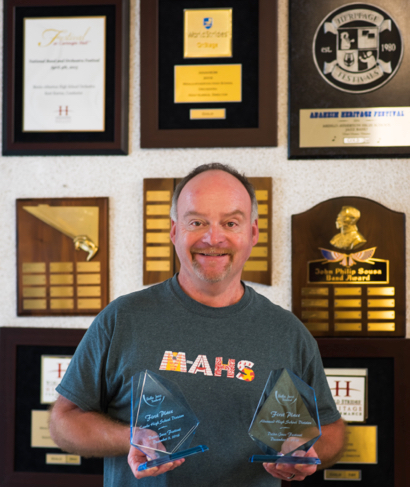 “I like to look at it as continuing the excellence, and adding on,” said Kent, who initiated something M-A had never had — an orchestra. “Pulling together a traditional full orchestra with strings and winds has brought more balance to the music program.”

The M-A jazz bands typically go to six to eight festivals a year; most high school bands do one or two. “As long as we have bands that play on that level, I want to give them exposure,” said Kent.

That kind of travel, of course, takes money. The program’s big fundraiser, the Big Band Dance, takes place on Saturday, January 21, from 7:00 to 10:00 pm in Ayers Gym on the M-A campus. This year there’s an option to make it a dinner dance by pre-ordering a Mediterranean meal. Details are available online.

Kent’s musical tastes are as varied as the music the orchestras and bands he conducts play. “I really listen to everything,” he said. “My favorite artist changes by the week.”

How much he personally sits down at the keyboard is also variable. “My wife can tell what kind of day I had by how I play the piano when I get home,” he said. “This job takes a lot out of you. I can be plunking and playing all day long, so some times it’s the last thing I want to do when I get home!”