Grateful Dead in Ladera? Yes, it really happened 50 years ago

Although some might not believe it because it does not appear in any official Grateful Dead chronologies, the famous Bay Area band played at Ladera School for the Ladera Christmas Dance on the night of December 17, 1966. We have neighbors’ recollections and newspaper accounts to prove that the event was a wildly successful evening.

Barbara Rusmore, formerly of Ladera, recalls being involved in preparations with the neighborhood art group. The team created window covers from long rolls of newsprint and dye, with a wax resist (sort of a one-time glass window effect) that appear in the photo printed in the Country Almanac. She also recalled police providing security, very loud music and a dancing but orderly crowd.

Ann Wilsack, another former Laderan, recalls, “Yeah, I brag about helping to organize a Grateful Dead Dance when I was in high school. The Ladera Community had put on a lot of dances for the teenagers and had actually made money on them. Someone found out that the Grateful Dead would do a dance for $2,000. We had money in the coffers and decided to spring for it. I may have been the one making arrangements with their manager, which is probably why I found myself in a circle hanging out with the Dead and their manager. Months after the dance, we hadn’t had another dance. My mom said that it was predictable, that after the blowout with the Grateful Dead, we wouldn’t go back to the local bands.” 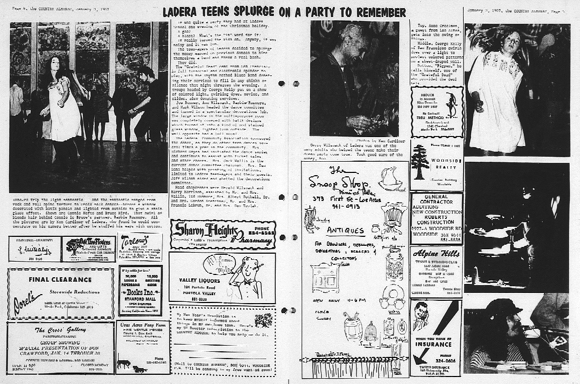 Before becoming a San Francisco institution and gaining worldwide fame, the band’s local connections include their first gig at long-gone Magoo’s Pizza Parlor located on Santa Cruz Avenue (where Harvest is now). Jerry Garcia and Bob Weir taught guitar lessons at Guitars Unlimited (formerly Su Hong) and borrowed all of the equipment for their shows from the store.

The band members and some followers lived on Perry Lane and Santa Cruz Avenue in the early ‘60s; Bob Weir even attended Menlo-Atherton High School for a time. Local connections are numerous but this show in the Ladera School’s multipurpose room is of special significance to the Deadheads living amongst us.

Countless magical events have occurred in Ladera over the last 70 years but few have included a band that went on to become one of the greatest of all time, was inducted into the Rock and Roll Hall of Fame, and whose musical legacy continues in many incarnations to this day.

This article originally appeared in the Ladera Crier; used with permission

Interesting, as the Grateful Dead’s official website contains a detailed and exhaustive listing of the thousands of shows they played-supposedly all-and this concert is not on the list…Who provided the picture accompanying the article, and was it from that night? Can someone confirm the date was 12/17/66? And anyone there have a recording of this show? Please let me know, and I will forward any confirming info to update their website, as Deadheads want to know…Thank you!

Douglas, I am the author of that story and have ‘proof’ that it happened on 12/17/66 based on articles in our local newsletter, the recap in the Almanac, and several accounts from people that were there. That photo at the top of this publication is not from that evening as far as I know, but the several others reprinted from the January 1967 Almanac shown are. I have been wondering about this event since hearing about it from long time neighbors years ago but finally did the research to prove it happened. I was planning to submit to the Deadbase folks. Please contact me at laderacrier@gmail.com to discuss, as well as any one else that has memories and possibly photos or a setlist to add. Thanks

Susan, this is amazing research. There had been rumblings about the Ladera show on the Menlo Park FB page, but it had been impossible to pin down. With eyewitness accounts and a newspaper report, there isn’t any doubt.

Douglas, the Ladera show was not in any GD Concert Chronology because no one knew about it. It makes perfect sense, though–the Dead had been at the Fillmore the previous weekend (Dec 9-11) and would play the Avalon two weeks later, so they had an open Saturday night. A local dance makes perfect sense.

I should add that almost all the easily accessible GD concert lists (Deadlists, Dead.net, etc) have not had meaningful updates in a decade or so. The only one really keeping track of these things is me, so you can look here, for example:
http://hooterollin.blogspot.com/2015/12/grateful-dead-performance-list-july.html

Because it’s my blog, I just added the Ladera date, so there we go. Susan, this is fantastic work. Don’t be surprised if people email you for a better scan of the photos.

Susan, this is fantastic research. Speaking for Grateful Dead scholars and fans, thanks so much for digging this up. The Ladera School show does not appear on any GD concert chronologies because up until this time, no one knew anything about the show (in any case, the easily accessible chronologies on Deadlists and Dead.net have not had meaningful updates in over a decade). It’s hard to be more definitive than multiple eyewitnesses and a newspaper report, with photos.

The Dead had played the Fillmore the previous weekend (Dec 9-11) and would play the Avalon the weekend after (Dec 23-24), along with opening for Otis Redding at the Fillmore (Dec 20) and at the Continental in San Jose (Dec 21) in between. But December 17 was a Saturday night, and working bands gotta work on Saturday night, so a local dance makes plenty of sense.

For those like reader Douglas who want to see where the Ladera show fits in with the Dead’s tour schedule at the time, see my blog post here:
http://hooterollin.blogspot.com/2015/12/grateful-dead-performance-list-july.html

with the Ladera show added, of course

I knew that the Dead had played at my school; thanks for filling in the details! We lived next to Ladera School, but I was maybe a bit too young to go. Maybe my older sister did; Ann (Wilsnack, not Wilsack) and Barbie were friends of hers.

Hello Iver, Yes that is the same school. The public school closed in 1989 and it is now home to the private Woodland School. Thank you for your interest!

Yes it really happened, I know because I was there. I grew up in Ladera and attended Ladera School. I was 14 at the time of the concert.

Hi Mike and Nick. I went also. How is life treating you?
I tried to walk around the school on a weekday after school hours a few years ago and the principal evil eyed me and made me leave.
I bought “Rave Up” due to you brothers. Ah, memories.
Scot A. (ditched Schmierer).

Hi Scott. Rave Up has held up well all these years. I wonder how many people get kicked off the school grounds looking for the Dead memories.

I missed this concert, but the Dead played at Ladera School at least once more — possibly September, October, or November 1967 — because I was there for that one. I recall Bob Weir introducing “Dancing in the Street” by saying, “We stole this one off a record.”

I was in 3rd maybe 5th grade at the time – details are fuzzy, but I recall seeing one of the ugliest women in my life one day in downtown Menlo Park. My uncle (RIP) said, “Randy, THAT is a folk singer. Don’t do drugs.” Found out much later on that it was the lead singer for the Warlocks.

I remember this well as I was a Freshman at Woodside. It cost 50 cents I think and I remember that Pigpen was the drummer. It was the first lightshow I’d ever seen and it made me feel seasick.