Fourteen Menlo Park Firefighters, one group of nine state-sponsored Swift Water Rescue Teams, arrived in Sacramento after midnight last. They are being staged at McClellan Air Force base, awaiting potential water rescues during this latest winter storm. The team is equipped with three inflatable boats and two power water craft.

A week ago the team was deployed to Oroville for a potential dam failure with attendant down-range water rescues. Fortunately that did not occur, and the team returned home. 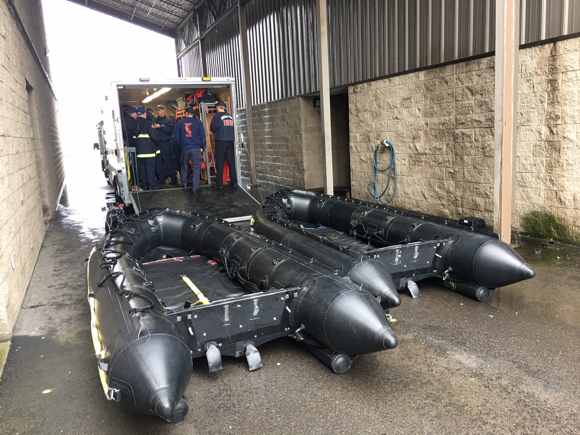 “The already saturated Central Valley with its fragile levee systems are of significant concern given the rainfall projections, that’s nothing new to the team,” said Menlo Park Fire District Chief Harold Schapelhouman. “Our personnel are prepared to carry out any type of fast or slow water rescue operation in support of local first responders. They are currently keeping busy going through the equipment cache today as they standby in a constant state of heightened readiness.

“We always hold back additional water craft like our air boat and rigid hull inflatable, so we maintain local capability, and we re-staffing affected Fire Stations now, so there is no impact to our local response to our residents.”