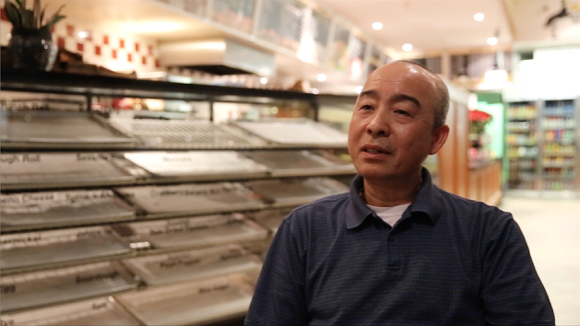 Editor’s note: From time to time, we’re pleased to spotlight the good work being done by Menlo-Atherton High School journalism students. This story about a downtown Menlo Park merchant, Anthony On Lao, seems particularly timely. It was reported and written by Megan McDonnell and Jackson Confer with photos by Erica Miner. Due to it’s length, we are presenting it in two parts.

Menlo Park is undeniably small. With its one strip of a downtown on Santa Cruz Avenue, many of the restaurants and stores have become a part of the culture, directly tied to a sense of familiarity for those native to Menlo Park. Posh Bagel stands out amongst Menlo Park hubs, the perfect place for families, adults, and children alike to grab a bagel or the popular fad, boba tea.

Posh Bagel is a chain in the Silicon Valley, all owned by a family from Cambodia. Menlo Park’s Posh Bagel had its re-grand opening on July 23, 2011, after a fire shut it down in 2010, and has since been headed by Anthony On Lao, the owner’s brother and a Menlo-Atherton High School parent.

Lao has lived in the United States since 1985, yet his story spans Cambodia, Vietnam, Thailand, and the Philippines as well.

Lao grew up in a small town in Cambodia, born in the late 1960s during a time of relative peace. After negotiating independence from France in 1953, Cambodia was a constitutional monarchy until a 1970 coup destabilized the country and launched it into civil war, with a US-backed republic fighting communist factions.

Women in small towns at this time typically raised a large family. Lao’s mother was no exception, giving birth to 15 children.

“But right now, all that are left are three girls and two boys. My mom had 15 kids. All [10] passed away. You know we didn’t have all that kind of medicine. Some got sick and died.”

In other cases, Lao’s siblings were not killed by illness, but by people.

“And then my older brother, he was killed by a helicopter. He didn’t speak English. The American helicopter and soldier with a Vietnamese soldier, they asked my brother to surrender, because they thought [he] was Vietcong. But at that time he [didn’t] surrender [because he couldn’t understand what they were saying], so he ran under a bridge. And they killed him.”

Living during the Khmer Rouge regime

The Khmer Rouge, a Marxist-Leninist faction led by Pol Pot, managed to seize control of the government in 1975. The brutal policies that they enacted against their own people have come to be known as the Cambodian Genocide. Between 1975 and 1979, the Cambodian government killed around a quarter of the entire country’s population, about 2 million people overall, through executions, torture, forced labor, and starvation.

The Khmer Rouge impacted Lao’s family as well. People were often placed in jail by Khmer Rouge soldiers for insignificant reasons, as the faction ruled with an iron fist with no toleration for dissent. Lao’s brother was one of those affected.

“Sometimes they’d get jealous. Sometimes, my brother bought medicine. Some people, if they don’t like you, they catch you. The soldiers [would] catch you and put you in jail.”

“If they kill him, they kill all my family. Pol Pot, like that. They killed a lot of smart people. They were looking for smart people to kill.”

Lao’s family knew of the violence and mercilessness of Pol Pot’s regime and tried to save his brother in jail.

“My dad, he knows people who worked in the government, and they said, ‘Tonight, you have to leave to Vietnam.’ My dad said, ‘How about my son in jail?’. They said, ‘Don’t worry about it. Leave tonight. You have to go right away.’ So midnight, my father and us all, we leave for Vietnam. Pol Pot, if they kill one [person,] then they will kill the whole family. That’s the way they do. Even the kids, everybody; they kill everybody.”

All in an attempt to rid the country of Western influence, Pol Pot methodically eliminated people who would question the regime. The Khmer Rouge targeted intellectuals, clergy, and anti-communists in particular, and punished whole families rather than individuals, similar to modern practices in North Korea. 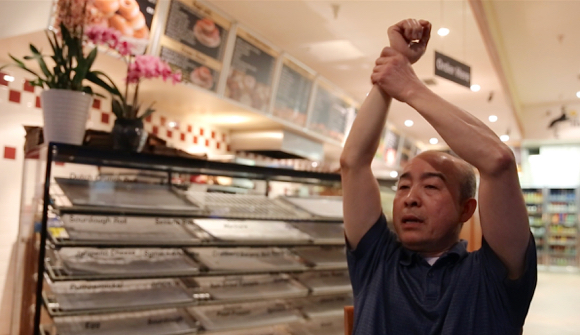 Tension at the borders

Upon the imprisonment of Lao’s brother, his family fled to the Cambodia-Vietnam border, where they lived for about a year. The instability of the Vietnam War and Vietcong regime threatened the area and especially affected the currency.

“[My dad] made a lot of money at that time. And one day my brother said, ‘Change all the money and keep gold and diamond.’ And my dad said ‘Ah, the money go up again! It go up again!’ And then in the morning the radio said the money changed. You know, in the Vietcong they always change. Every couple years, you don’t know. And then all the money was gone.”

“I saw with my eyes people, Cambodian people, it’s like doctors, teachers, lawyers, they crossed the border and tried to leave to Vietnam. But the Vietnamese people, they’d put them in jail. Government to government, they’d say ‘Give [me] my people, I’ll give you something else.’ So they trade. Sometimes Vietnamese people would go over the border, and Cambodian people would catch them and put them in jail. They trade, but when they trade they kill a lot of people. You can see it, you see it right away.

When I [stood] on the border to pass over there, they killed right there. I saw it. Just like that.”

“If they kill, they dig a big hole and fill it with a lot of people. They’d kill one by one. You close your eyes. A lot of people, even the babies. You see it, it’s really scary.”

Almost 24,000 of these mass graves, dubbed the “Killing Fields”, have been discovered in Cambodia, many of which are along the Vietnamese border where Lao lived.

On to Vietnam and then Thailand and the Philippines

The Laos next moved to Vietnam, near Saigon, where they lived for three or four years. In Cambodia, the genocide still raged as the government systematically eliminated large portions of the country’s population.

Lao began working in Vietnam, where his family first sold iced tea, and then ice cream.

In 1979, the Vietnamese government pushed the Khmer Rouge out of the Cambodian capital and established a new government in its place. However, Pol Pot’s forces continued to wage war in the countryside and controlled large areas of the country.

After this regime change, Lao’s family returned to Cambodia. Lao’s parents saved enough money to pay for someone to take his sister, her family, and 12-year-old Lao across the ocean to Thailand on a skiff to live in a refugee camp.

“Finally we find somebody who can take, you know, you have to pay them to take you to Thailand. So they took us to Thailand in a small boat. One day one night on the ocean.”

The success of arriving in Thailand was short-lived. “After we arrived in Thailand, so we jumped out of the ocean, and then we slept under the mountain over there. So in the morning, we went up to the street and the police, they saw us. [They] took us to the camp, small camp, and then a couple weeks later they take you to [Khlong] Sikhui.”

Initially hostile to the fleeing Cambodians, neighboring Thailand eventually caved in and set up camps for the massive influx of refugees caused by the guerrilla war still plaguing the rural areas of Cambodia. Khlong Sikhui was one of larger camps run by the Thai government. Lao’s group of six — his sister, her three daughters, and husband — shared one of the small structures characteristic of the refugee camps. Khlong Sikhui, for Lao, marks an unhappy point in his life, full of poverty.

“I lived there for three years. Living there was really hard. They [gave] you only five gallons a day of water. Dirty water. It was pumped from the river. They’d pump it up and give it to you to shower, eat, whatever.”

Lao lived on junk food, the only sustenance provided by the camp. The rest of his family still lived in Cambodia, unable to pay for their own traveling cost. Lao’s brother-in-law’s brother lived in France and would send support. This overseas support gave Lao the opportunity to earn some money, which he used to purchase higher quality food.

“At that time, we were really poor. My sister’s brother, his brother lived in France, so they would send him money. So at that time I worked for him. I just worked for any money.”

The authority at Sikhui demanded cooperation from the refugee inhabitants.

“Every morning they’d have you stand up at eight o’clock. They’d pull the flag up. So everybody had to stand up. You cannot sleep. If the security goes by, they saw you sleeping, you don’t stand up, they’d spank you. If you fight, they spank. They’d hang you up in the street, from the morning to the evening. That’s the way they do.”

“They had a fence. If you jumped out and went into the other street or to find something to eat or to get some money from somebody. If they catch you…they catch a lot of people, they catch a lot of people. You know, they take you all they way from [the distance of] Starbucks to here [Posh], and you almost died. They’d put you in jail. And tomorrow, up to when they raise the flag up, they tow everybody to come to see it. To say ‘Talk about this guy. He ran away from the camp, we [caught him].’ He got spanked. He’d [have] a big, big wound on his skin.”

One step out of order would result in this kind or similar punishment, no matter the age of the offender.

While in the camp, one of Lao’s friends would go and learn English, and then teach Lao what he had learned. Soon, though, Lao and his sister’s family were transferred to another camp in Vietnam, and then another. Each camp improved in quality and in freedom.

Finally, after a short time there, they were transferred to a very open camp in the Philippines.

“After six months later, we go to the Philippine camp. Everybody had to the start there. There is an ESL, and if you cannot pass, they will not let you go [to the United States]. There, you can go anywhere you want to go. It was like vacation time.”

In the Philippines, everyone received an English education, as well as practical skills.

“They teach you how to get a job, what to do when you get lost, how to go to ask to go back home, how to talk to somebody nice.”

Both photos were taken at the Posh Bagel; in the second Lao demonstrates how the Thai soldiers would hang refugees.

Thank you! What a story of resilience! I have always loved Posh Bagel. Now, I love it more.