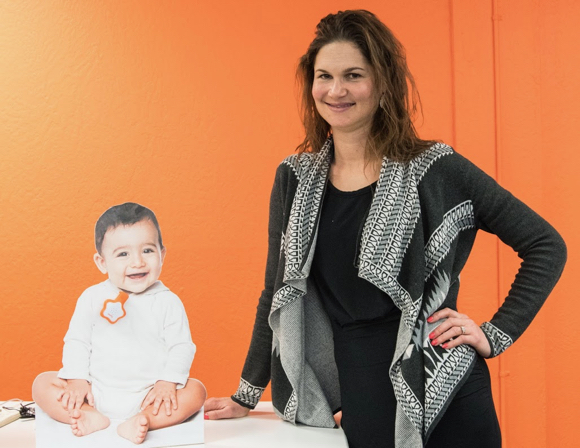 Nicki Boyd, co-founder with two others of Menlo Park start-up VersaMe, admits they came up with the name for the company’s first product, Starling, without knowing the bird of the same name is studied for its advanced linguistic capability. “It was chosen more because a star has a positive connotation across cultures,” she says.

After a decade in London working in finance and private equity, British-born Nicki came to the states as a Sloan Fellow at Stanford. “I was a 30-something trying to figure out if a career change was in order. And as a triathlete, I wanted a place with good weather, unlike England!”

She met her two co-founders, brothers Jon and Chris Boggiano, through the Sloan program. The duo had already started and sold companies in the education field and were actively thinking about what they wanted to do next.

Meeting Dr. Anne Fernald at Stanford’s Center for Infant Studies led them to zero in on a product that would help parents talk more to their children. The reason: Babies learn language by hearing it. The more they hear, the faster their brains learn.

“To simplify the research, it all boils down to one thing,” explains Nicki. “It’s all about the quantity of words, the more the better. And as the old saying goes, ‘you can’t manage if you can’t measure.’ Hence the development of  Starling, which monitors the words spoken throughout the day.”

Launched last fall, the product clips onto a baby or child’s clothing. Right now, it’s mostly being marketed through word of mouth, partnering with parent classes, and some online parenting sites. A trial with Barnes and Noble starts soon, and Nicki says they plan to work with bookstores and libraries, too.

“It’s a new product concept that requires a little explaining,” she says. “We know from the research that words are equal, no matter what language. The earlier you teach, the easier the learning is. Our goal is to help a child fulfill his or her maximum potential.”