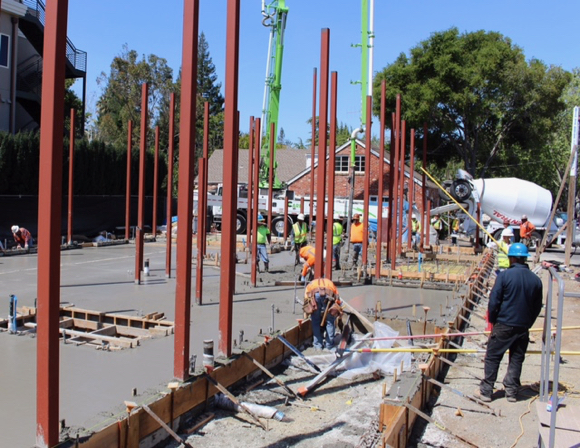 Lots of news coming from the Menlo Park Fire Protection District, thanks to updates from Chief Harold Schaplehouman.

There will be a community meeting on April 29, 2017 at 10:00 am at Fire Station 77 located at 1467 Chilco Street to discuss the future of essential fire and emergency services in the Belle Haven neighborhood of Menlo Park and the M2 areas.

Fire Chief Schapelhouman will explain the current emergency services deployment in Belle Haven, the strategic location of Fire Station 77, the impact on fire services due to the current and future expansion, growth, and development in the M2 area as well as the limited fire station location options in the Belle Haven and M2 areas.

Fire Station 6, located at 700 Oak Grove Avenue, in downtown Menlo Park is almost ready to go up. General Contractor Gonsalves & Stronck Construction Company has finished all of the preparation of the underground utilities and seismically-rated concrete footings strengthened with reinforced steel rebar. On Friday, A week ago, the contractor finished pouring and finishing the concrete slab floors for the new Fire Station.

This winters constant rain has delayed the project by about two months but the contractor has recently managed to reduce that by about half. The Fire Station  is still on track to be completed by the end of the year. 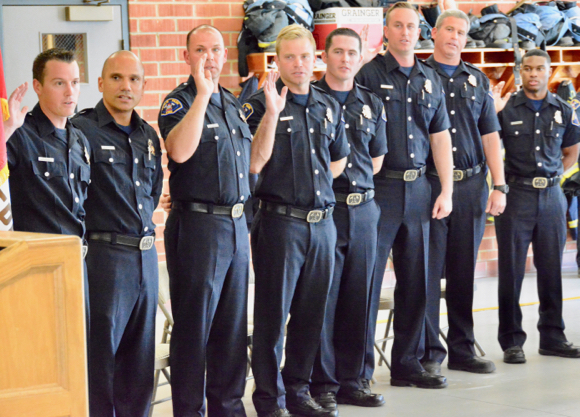 They started the Joint County Fire Academy in September of 2015, finishing the Fire Academy in December, and starting the probationary period. Prior to attending the Fire Academy, they taken entry level written exams, had oral interviews, underwent psychological and medical evaluations as well as polygraph and background reviews prior to receiving a conditional offer of employment.

Menlo Park Fire was recently rated a Class 2 Fire agency under the Insurance Services Organizations (ISO) Publication Protection Classification (PPC) system after a review that began six months ago and culminated with a presentation and report to the Fire Board asking them to accept the report and rating last week.

Nationwide, ISO evaluates and grades 46,042 fire agencies using a newly updated Fire Suppression Rating Schedule (FSRS) every four years. Agencies are assigned as a 1 – 10 classification rating, with 1 being considered superior and a 2 being very good.

“The Fire District maintaining a class 2 rating is good for residential and business owners because it affects the cost of insurance they purchase,” Fire Chief Schapelhouman said. “Nationwide only 241 fire agencies have earned a class 1 rating and 1,324 were rated as a class 2 Fire Agency. That places the Fire District in the top 3.42% of all fire agencies rated by ISO in the United States and that’s something to be proud of.”

I certainly hope the new hires are not getting $300K a year.

This was a nice press release from the Menlo Park Fire Department. It would be nicer to see them work on the issues they have been having with the cities (Atherton, Menlo Park) and with the residents of the communities (Belle Haven for the threat of eminent domain to take houses and all communities regarding the very high pay to members of the MPFD). It would be nice to know that the MPFPD was doing something to address these issues.

So, when I said it was three hundred thousand per year, I was incorrect as far as rookies are concerned. It was more like 186K! I am sure if I had information on the more administrative staff, it would be in the 300K range.