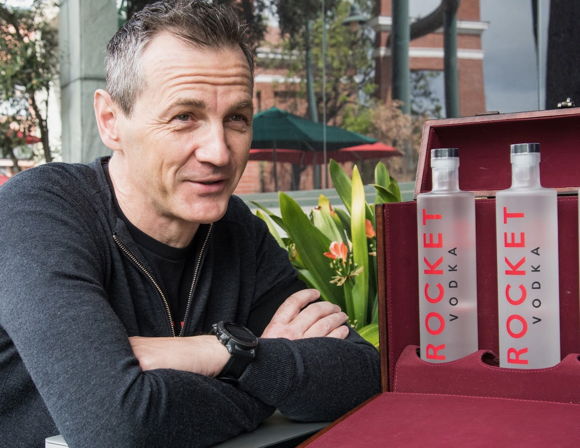 Dariusz Paczuski admits “vodka is in my blood.” That’s one reason he started Rocket Vodka in his Menlo Park garage.

Dariusz’s family fled Poland to escape communism when he was about a year old, eventually settling in Norway, where he was a member of the Norwegian National Swim Team. When he was 20, a  swimming scholarship to Cal State Long Beach brought him to the states. But memories of his father’s moonshine vodka lingered.

“He’d send me out to the yard to pick up apples that had fallen to the ground, explaining that they were the sweetest and the ripest,” he recalls. “I’d bring them inside and my mother would put them in an old Polish juicer. Then my father would ferment the apples in the basement. I still remember the smell!”

It’s his father’s recipe that he’s basically using. Rocket Vodka is handcrafted from 100% fresh-pressed California and Washington apples and cut with Sierra Nevada mountain water sourced from Folsom Lake, Jenkinson Lake and the South Fork of the American River. It’s distilled twice, keeping only the purest heart of the distillation. It won Best Vodka and was a Gold Medal winner at the 2016 California Crafts Spirits competition.

The name Rocket Vodka was inspired by Dariusz’s style of skiing. “Friends call me the Polish Rocket because I ski fast,” he laughs.

He explains that most vodka today is made from grains, although there are a few others being made from apples in Washington and New York.

“Starting out I was clueless,” admits Dariusz, whose background, most recently, is in tech. “But I’m smart enough to acknowledge what I don’t know.

Priced at $45  for a 750ML bottle, Rocket Vodka can be purchased online as well as in Menlo Park at the Willows Market and Draegers. Nearby restaurants serving it include Quattro at the Four Seasons Silicon Valley and Vino Enoteca, both in Palo Alto. There will be a complimentary tasting at the Willows Market from 3:00 to 6:00 pm on Saturday, May. 6