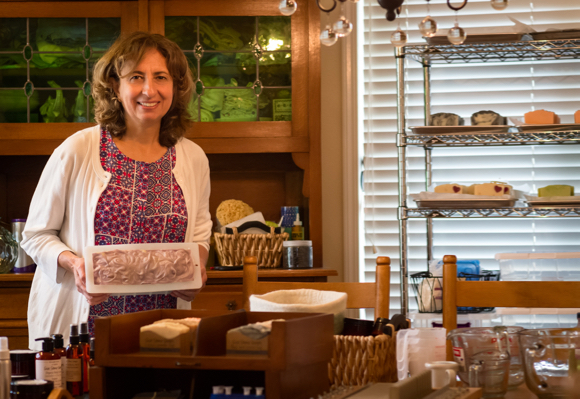 Most of Cathy Bitler’s professional career was spent in the lab. As a biochemist, she worked at companies involved in finding new drug therapies for stubborn-to-treat medical conditions.

Today, her focus is on more immediate gratification through her handcrafted soaps, lotions, and scrubs made in her Menlo Park home.

Her journey to soap maker started, somewhat unusually, on a research trip with her grown daughter studying marine snails. “We were on the Kodiak Peninsula in Alaska and would get up at 3:00 or 4:00 in the morning to study the snails at low tide,” she recalls. “We had to walk on stones in the water and we’d come back wet and tired.

“One afternoon we walked into a gift shop that was selling handcrafted soap and bought some. Bathing with it, we felt warm and invigorated after being so cold and damp.

“I started thinking: I love the idea of combining oils and the idea of olfaction [the chemoreception that forms the sense of smell]. From those musings came Sea Stone Soap, named after those stones we walked on in Alaska.

“This is the perfect way for me to combine the creative part of science with something new.”

The soaps are made in her home lab. After combining ingredients, the mixture is poured into molds. Twenty-four hours later, she has bars of soap.

“My production is still small,” she says. “During street festival time, production can go to 800 bars a week, but most of the time it’s a couple hundred.”

Cathy’s soaps and lotions can be purchased online as well as at a number of local merchants including the Allied Arts Guild, Ladera Garden and Gift, and Shady Lane.