Fourth graders at Peninsula School rally and march for “peace, love and justice” 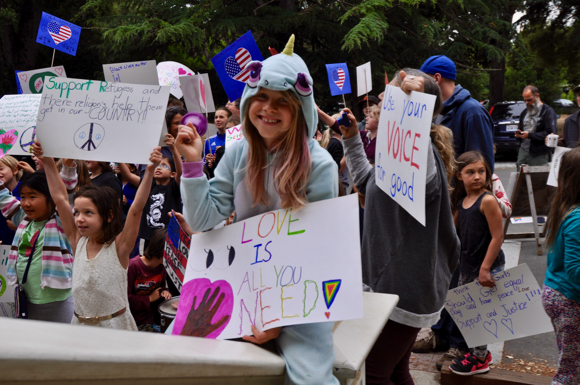 While some people may not believe that 9- and 10-year olds can make a difference, one Peninsula School teacher, Betty Achinstein, believes they are change agents. This morning, Betty’s 4th grade class at the school in Menlo Park organized a march for peace, love, and justice.

The students first rallied at the school. Various students took turns coming to the microphone sharing their thoughts about peace and justice with parents and students from other classes. Betty then led everyone in all six verses of We Shall Overcome. It was like a touch of the 60s had been sprinkled on the assembled crowd.

“We were inspired by a number of factors: our Get Out the Vote campaign this fall; studying the civil rights movement; and our response to post-election discrimination this year,” says Betty. “We identified that we wanted to research the following topics: immigrants and refugees, racism and sexism, religious discrimination, and the environment. 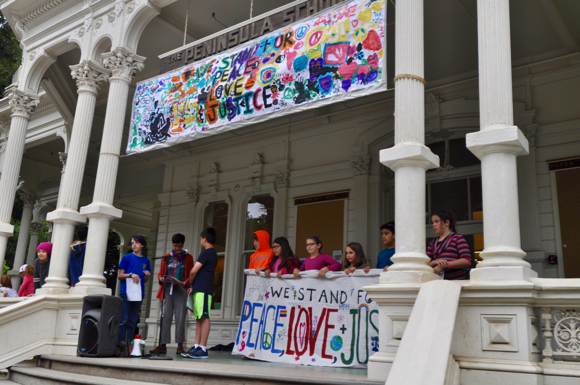 “Inspired by Dr. Martin Luther King Jr.’s speech, we wrote our own Book of Dreams for the kind of world we hope for. We met with Congresswoman Eshoo to discuss our concerns. We then identified the kind of activism we wanted to pursue.

“We decided to send a message for peace, love, and justice. We want to let everyone know about the kind of world we hope to create.” 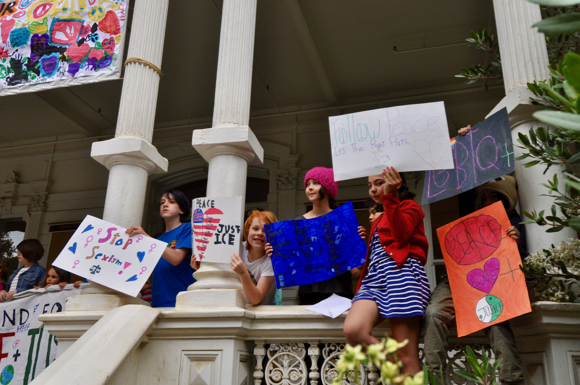 After the morning rally, the students marched through Palo Alto, starting at Lytton Plaza and ending at City Hall.

Emailed longtime activist and Peninsula School neighbor Dorothy Fadiman: “Today, I went to Lytton Plaza and saw such a beautiful sight — a cluster of bright eyed 9- and 10-year-olds with their handmade gaily colored signs calling for awareness and care, for the planet and for each other. Anyone who saw them while they were marching,
or any passerby as they sat in the Plaza, could get a feeling for their sweet energy
and their message: a gentle, and in its own way, passionate call to awareness and to action.” 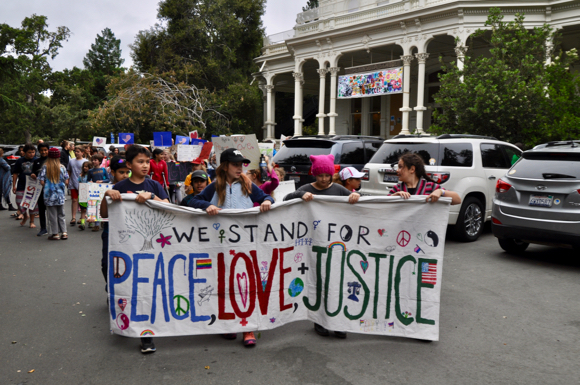 These students are bastions of hope. These children critically examined the world they lived in and are trying to create a better one. Honored to know some of them!

Wow, teacher inspiring 4th graders now! This is truly awesome (in the real sense of the word); to paraphrase/rebut CK. What a wonderful world we live in where people of all ages can support what is GOOD. Who could not be in favor of PEACE, LOVE, and JUSTICE?
x x x x MAS

Peace/Love etc., WOW, Haight Ashberry all over again…..lets call it “Hope and Change”….oh that didn’t work so well either! So, MA Siegelman your awesome opinion of the common core style of the new world order…..not so good!

Hey man,
I’ve seen you’re comments around here, and it seems to me like a bunch of inconsiderate nonesense, then again, maybe your mother never taught you about what to do if you don’t have anything nice to say.

Here we have children, CHILDREN for gods sake, advocating for peace, love, and justice, and somehow, you brought a damper to that too. Judging by your comments, though, I’m not surprised Peace, Love, and Justice aren’t your type of things…

Hey Man? Slim, you apparently have forgotten about Freedom of Speech” as dictated in the Constitution? I can write and say my opinion, albeit, the progressive would love to silence many of us that have the same opinion of this child abuse!
The “children” is usually a talking point of the progressive left which I referred to before. The “Hope and Change” and the peace symbol all represent the failed anti governmental protests since the sixties! Look at the Anarchists in Beserkly!
So, what some parents doing, they dress their kids up in the women’s protest pussy hats, some protest signs and tell them this is about peace, love, and justice. Cut the crap!

Hey CK, I’m sorry you’re so threatened by the free speech of 10 year olds that this worries you so much. Maybe you should make yourself a sign and go out to protest it?

Teaching kids to research and stand up for their beliefs is such an awesome learning opportunity. Good work, Peninsula!

Sorry MS, you looser progressive’s do not threaten me in anyway, especially when you show your naive ignorance!

M, HaHa….you are a genius for sure!

No he’s right I’m one of the kids who was on the march (bright orange hoodie) our teacher made us go on that march and it was basically a march against trump. we also had many meetings before hand in which she told us if anyone asks why we’re doing this we should tell them it was our idea and our idea only (in reality none of us wanted to do it). she also forced her political opinion upon a bunch of fourth graders. you guys probably won’t see this but I wanted to get the truth out.