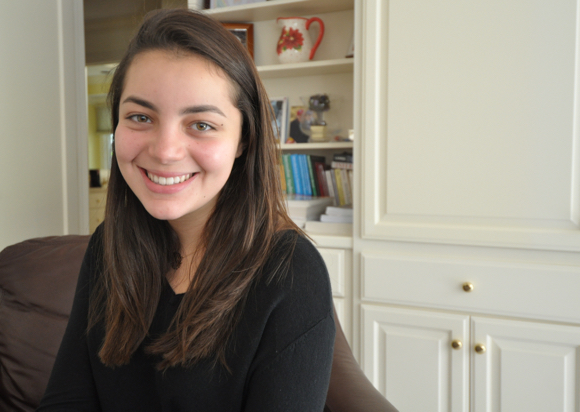 Menlo Park resident Madeleine McGlynn started singing about the time she started talking. “My Dad listened to jazz standards, and every day when he got home from work, I’d have him play whatever songs he wanted to introduce me to. That music has remained my era. I love Harlem Renaissance jazz, Ella Fitzgerald, Billie Holiday.”

Madeleine will be sharing her passion for jazz standards when she performs at this year’s Stanford Jazz Festival. She’ll take the stage along with Bay Area rising star vocalists Tiffany Austin and Allegra Bandy and fellow Stanford Jazz Workshop alumna Nina Grigg, performing best-loved tunes and standards from the Great American Songbook.

“I’ve performed before people before,” she says, “but never on this scale. This will be my first big public performance.”

Now a rising junior at The Nueva Upper School in San Mateo, Madeleine attended Nueva at the Hillsborough campus from first grade on. She first started performing at school events, became a member of the Middle School’s Menuhin Program and the Steel Drum Band.

Since the summer of 2014, she has attended the Stanford Jazz Summer Workshops and has received numerous awards for her performances including Outstanding Middle School Musician (2014), Outstanding Achievement (2014, 2016) and Outstanding Soloist (2016).

In the fall of 2015, Madeleine was invited to join the award-winning Skyline College Vocal Jazz Ensemble, under the direction of Michelle Hawkins (whom she met through Stanford Jazz Workshop). She has performed at The Old Skool Café, a non-profit youth-run supper club in San Francisco, has competed at Jazz Search West (2016), and been a National Young Arts Foundation Competition finalist (2016).

While in ninth grade, Madeleine produced and recorded a CD, singing covers of six songs, as well as an original song she wrote called “BLINK” after which her album was named. She sold it as a fundraiser for the Ronald McDonald House.

“Music was always something like a friend to me,” explains Madeleine, an only child.  “It was like having a conversation with myself.

“The great thing about jazz is that it’s all story telling. Each time it’s a different story. It allows the artist to expose her own identity through it. Newer jazz takes on different tones. Today we are in a time of confusion, and the music reflects it. Music is always fluid, never constant.”

Given that she’ll be a junior this fall, we were interested in hearing her thoughts about college. She threw us a bit of a curveball: “I think I want to do something in science, probably biology/pre-med. Music, science and math all correlate.

“But I’m not going to give up music. I’ll be the doctor that sings to patients in surgery!”