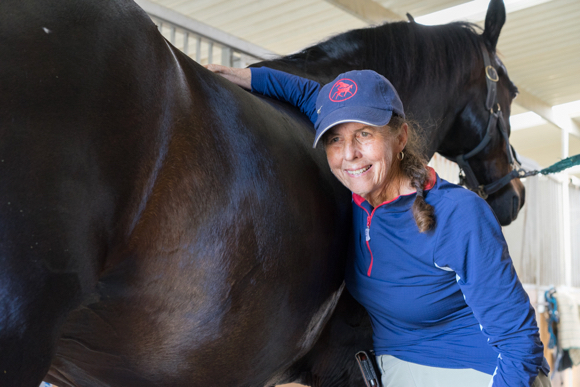 While riding instructor and horse trainer Nancy Hey no longer competes in shows, she’s doing the next best thing — preparing horses and ponies to be at their best for their riders during lessons and in the show ring.

Nancy is the founder of Strideaway Farms located down a long and winding road in Menlo Park that most people don’t know exists. We’d gone out to visit with her in advance of the Menlo Charity Horse Show, which takes place August 8-13 at the Menlo Circus Club in Atherton. A number of her students will be showing as well as her assistant, Erin Peterson, who competes professionally.

Nancy is a long-time committee member of the event, which benefits the Vista Center for the Blind. That is significant as Nancy herself is visually impaired — she teaches with the aid of binoculars — and has used Vista Center’s services.

“I’ve been on the Vista board and it’s a fantastic organization,” she said. “I’ve also been a client, getting my first computer through Vista.” 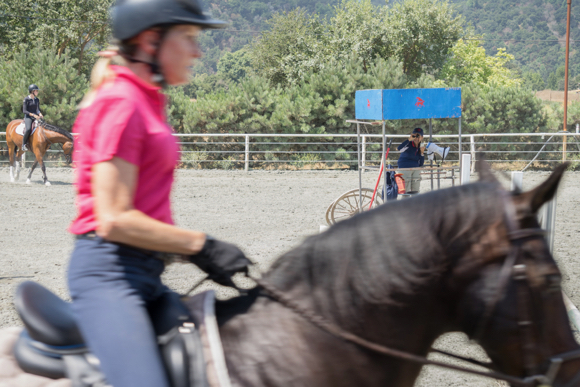 Nancy’s success at training and show competition is being passed down to successive generations. “My daughter first got on a horse when she was six months old, and at age two she cantered with me for the first time.  She’s been very successful in the show ring, competing in Hunter Jumper classes.

“Now her 8-year-old twins [a boy and a girl] are competing. My granddaughter won at the Menlo Charity Horse Show last year.”

Nancy still rides four days a week, but as she says, “Only the safe ones, although I did get bucked off and broke a rib fairly recently.”

Admitting she can’t count the number of times she’s landed on the ground, she says her daredevil riding is now in the past. “I trained with Jack Melville at the Stanford Barn and used to jump those solid 4 feet, three inch brick fences. I had no fear.”

Raised in Southern California and first riding in Griffith Park, Nancy and her husband Randy moved to Northern California in the early 70s. She focused competitively on Hunter Jumper classes before starting an intensive regimen of Dressage training with three-time Olympic rider Sandy Howard, Olympic coach Melle Van Brugen, and Anders Lindgren among others. Nancy has competed in FEI level Prix St. George and Intermediate I.

“My main focus today is to look upon teaching riding as teaching life skills because you have to be dedicated and disciplined and responsible and kind and thorough to be a good rider,” Hey emphasized. “I am hoping that I teach all of the kids who ride with me not only empathy with a horse, but also the ability to make it do the things they want to, and that takes strength, inside and out.”