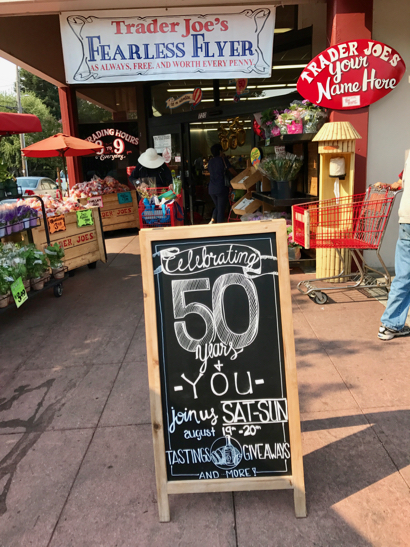 We stopped in at Trader Joe’s on Menlo Avenue today and discovered the food chain was celebrating its 50th anniversary this weekend.

That made us feel a little smug as we knew TJ’s way before the Bay Area was blessed by its presence. In the early 70s we shopped at the original Trader Joe’s on Arroyo Parkway in Pasadena and well as the one on Mission Avenue in South Pasadena.

Here’s a little history of the early years, courtesy of Wikipedia:

“Trader Joe’s is named after its founder, Joe Coulombe. The chain began in 1958 as a Greater Los Angeles area chain of Pronto Market convenience stores. The original Pronto Markets were so similar to 7-Eleven that Coulombe felt the competition with 7-Eleven would be ruinous.

“Coulombe is said to have developed the idea of the Trader Joe’s South Seas motif while on vacation in the Caribbean. The Tiki culture fad of the 1950s and 1960s was fresh in the cultural memory, and Trader Vic’s was at its height with 25 locations worldwide. He had noticed that Americans were traveling more and returning home with tastes for food and wine they had trouble satisfying in supermarkets of the time.

“The first store branded as “Trader Joe’s” opened in 1967. This store, on Arroyo Parkway in Pasadena, California, remains in operation. In the first few decades of operation, some of the stores offered fresh meats provided by butchers who leased space in the stores. Trader Joe’s at one time had sandwich shops, freshly cut cheese and freshly squeezed orange juice.”

The other thing we remember about the two TJs in SoCal, where we were living at the time, was high end wine at great prices, handy for impromptu wine tasting parties.

Bonus points to folks who remember what was at Trader Joe’s current Menlo Park location before it became TJs.