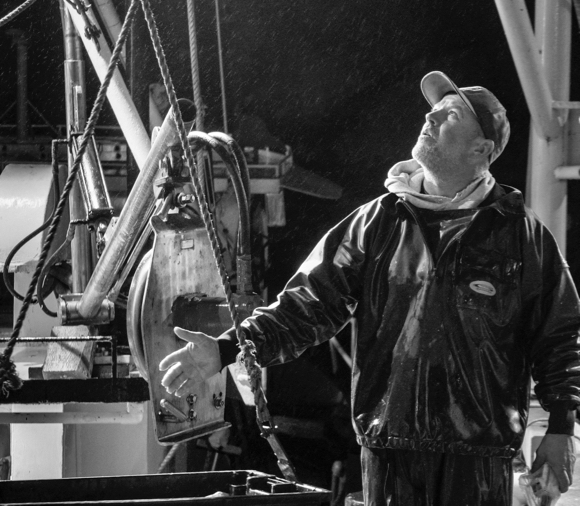 When we asked Menlo Park-based photographer Barry Fleisher how he shifted from chronicling the construction of the new Lucile Packard Children’s Hospital to capturing fishermen working out of Pillar Point Harbor, he said he saw more similarities than differences.

“They’re both about people at work,” he said. “Hard and sometimes dangerous work.”

His latest project began in January, and he goes to the coast a couple of times a month. He has long used a Panasonic Lumix GH3 but recently purchased a GH5. “They do not have a full frame sensor, which is the downside,” he said. “But they are a manageable size. I also like the fact the LCD screen pivots out and swivels so that I can hold the camera over my head and still shoot.”

Six of Barry’s photos of fishermen were selected by the Coastal Art League to be part of the California Coast Juried Show that runs from September 1 to October 1 in Half Moon Bay (300 Main Street). The opening reception is on Saturday, Sept. 2, from 2:00 to 5:00 pm. 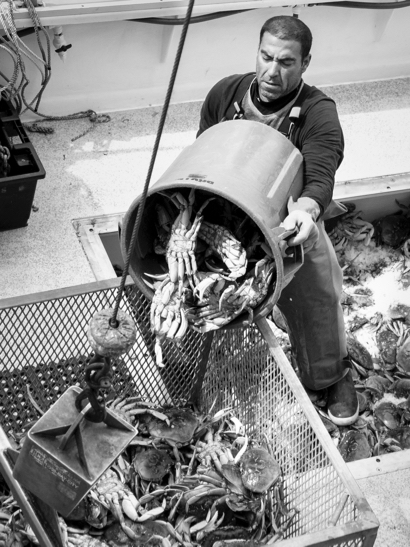 He chose black and white, he explained, “because I didn’t think color added anything and, in fact, detracted from what I wanted to do, which was to concentrate on composition and lighting.”

Barry selected two of the photos chosen for the exhibit to share with InMenlo readers:

“One is a night time shot which I took around 9:00 pm in June when a wholesale boat had docked. The fisherman is looking at a scale, weighing the fish he’s caught. It was misting and a little chilly.

“The other is of Tony, who is a year-round fisherman, although this was shot during crab season. He was selling retail right off his boat on a weekend. I was trying to catch the action of him transferring the crabs out of the hold of the boat and into the barrel.”