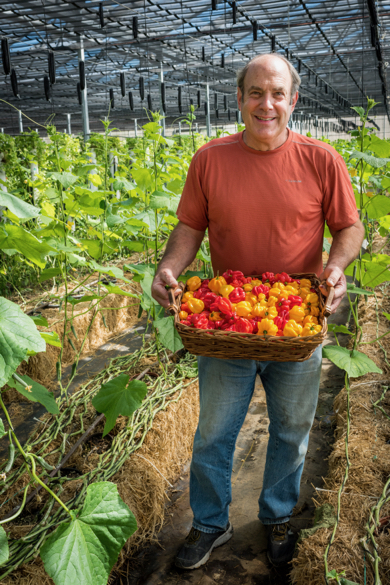 Farmer David Winsberg is a passionate steward of the land but that’s not what got him from Florida to California. “I came out to be an apprentice glass blower with Billy Bernstein,” he informs his two visitors at Happy Quail Farms in East Palo Alto. “I fell in love with California and worked at various jobs before deciding to do something on my own.

“This has been farmland forever,” he says looking over his land and adjacent acreage he leases from long-time Maltese farmers. “I took over in 1983 just before East Palo Alto became an official city.”

Initially David sold quail eggs to Draeger’s and a few sushi bars, hence the farm’s name. Now he is best known for his peppers, which he brings to the Menlo Park Farmers’ Market during the May through December growing season, although he warns that this year’s season may be much shorter.

He grew up on a pepper farm and was the first to grow Padrons locally. He’s proud that they are picked at pubescent stage before they get too hot. “When they turn red, they are really hot,” he says.

Besides selling products at farmers’ markets and online, David supplies high-end San Francisco restaurants with ingredients that are not routinely found elsewhere, like aji amarillo, a bright orange pepper that is an essential ingredient to Peruvian cooking. “They’re in almost all of the Peruvian sauces,” he explains.

Peppers are not the only thing he grows. He looks for unusual things, such as Fraise des Bois, a kind of strawberry better known in Europe that he grows in tall tubes.

Dryness is the biggest problem farmers face in California, according to David, this past winter not withstanding. “You get white flies, aphids and thrips, which are about the size of a grain of pepper. We combat them organically, because if you spray them, you also kill off their predators.”

It’s a treat to walk around his property as he also has multiple fruit trees, which at this time of year are ripe and ready for sampling!