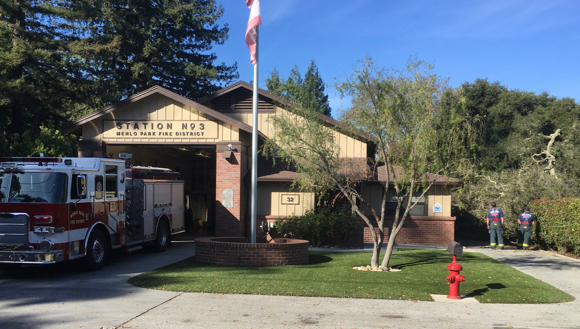 A giant oak with a base trunk circumference of 138 inches and estimated to be over 100 years old gently laid over at an angle almost intentionally avoiding contact with the Fire District’s Station 3 located in the Town of Atherton Monday night.

Last June, the Menlo Park Fire Protection District purchased the 39,640 square foot residential lot next door where the oak lived along with a 1950’s single family, 1,810 square foot single story ranch style home.  The property is directly next door to its longest continuously operating Fire Station at 32 Almendral Avenue. All the trees were recently trimmed and checked, including the historic oak tree. 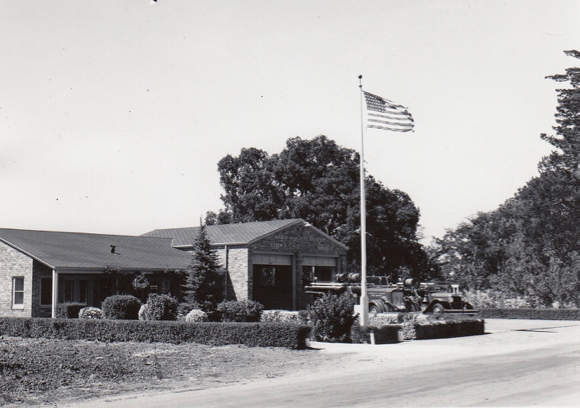 Fire Station 3 was first built in 1937, long before any of the current homes surrounding the station existed. The then unreinforced masonry building was moderately damaged in the 1989 Loma Prieta Earthquake and the Fire District was able to rebuild it. The oak tree can be easily found in any photograph of the Fire Station dating back to 1937.

“I’ve worked here for 37 years and when you were assigned to Station 3 one of your jobs was to daily sweep up the leaves and acorns that came from that oak but nobody complained because it essentially provided shade for the entire Fire Station,” said Fire Chief Harold Schapelhouman. “When we purchased the property next door, we made sure it was safely cut back because the Fire Stations sleeping quarters are on that side of the Station. I’m glad we had that done, but everyone’s sad to have lost this old friend and giant Oak who’s last act was to gracefully miss hitting the Fire Station. It’s pretty amazing if you think about it”.

A diameter of 138 inches is, more or less, 11 feet 6 inches. Did you mean circumference?