Once a physicist, Lee Middleman is now a ceramicist

Is there something about physics that leads to art? We were curious about that as ceramicist Lee Middleman is the second physicist we’ve met who has had a passion for both. (The first was Hideo Mabuchi, profiled in 2015.)

After getting a PhD in physics from Stanford, Lee worked in a number of successful Silicon Valley high tech companies. When the last company he worked for was sold, he decided to take time off to travel and explore art, which included taking ceramics classes at Palo Alto Art Center and Foothill College.

“I was taking one class a week at the Art Center and spending five days a week on ceramics,” the Portola Valley resident said, adding, “I’m not good at doing something just a little bit!” 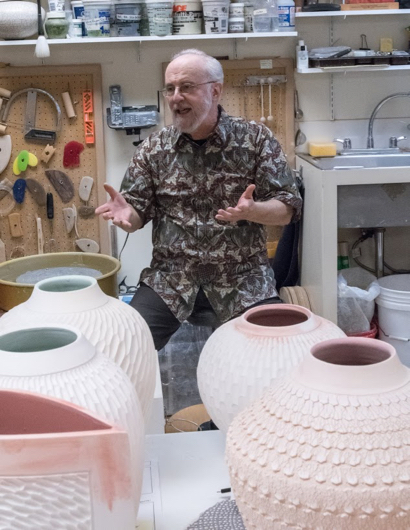 When he realized he wasn’t going back to the business world, he built a ceramics studio in his home, that’s adjacent to what serves as his gallery. He’ll be hosting an open house there on Saturday and Sunday December 2 & 3, from 10:00 am to 5:00 pm; the address is 16 Coalmine View. On display, among other works, will be hand-carved bowls highlighted by a celadon glaze, which he developed after visiting Yaotou, an ancient ceramics village in western China.

Lee speaks to the similarities of his former and current career. “When you’re a potter, you’re always fixing things, experimenting and trying something new.

“As a physicist, I was always encountering challenges. Now that challenge can be clay, especially when I travel to a foreign country where the clay is so different. I have to ask myself, ‘Given these characteristics, what can I make?’

“Finally, there’s a perfectionist part of me that comes from physics.”

Lee travels frequently, drawing on what he learns from ceramicists he mets as well as U.S.-based artists. “In my business career I ended up traveling quite a bit,” he said. “Now I combine ceramics with travel. I get invited to work with other artists from around the world, often times combining that with raising money for a local charity. That is something I find very satisfying.”

He also enjoys inviting artists he meets to come and stay with him, working alongside him at his studio. “We have fun experimenting together.”

Reflecting on his two successful careers he says: “I’m glad I’ve had both careers.  As a manager in business, there was both a lot of responsibility and a lot of pressure. Now it’s all about deciding what I want to do when I want to do it.”