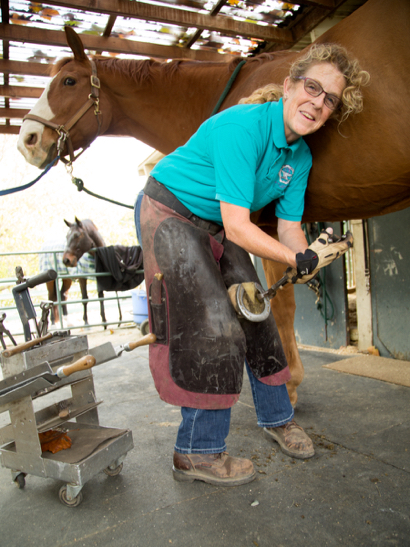 If you’re not a horse person, you might not know that horses need new shoes every six weeks, and that making those shoes and attaching them to the horse’s hooves is both an art and a craft. It’s tough work that requires skill, training and strength.

As such, being a farrier is not typically considered a female profession, but it’s one that Margie Lee has been plying for the past three decades.

Margie’s been around horses her entire life. She grew up riding on her grandfather’s ranch in Portola Valley and showed competitively, initially in Eventing and more recently in Dressage.

Thirty plus years ago, one of her horses turned up lame. Caught in a disagreement between her vet and her farrier, she started trimming the horse’s hoof herself. That led to her apprenticing with two notable farriers, Dick Threlfall and Margo Jolly.

“Being a farrier means I get to be around horses and get to be creative, seeing things that need fixing,” says Margie. 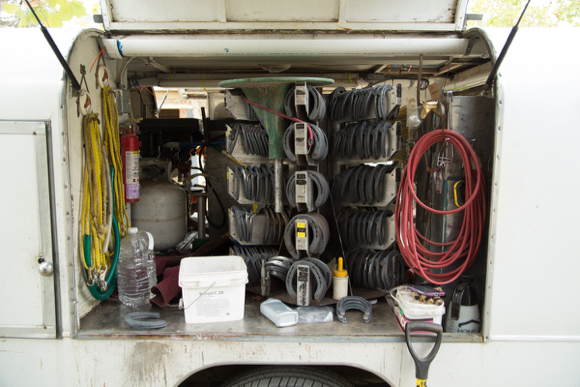 The human body is in an awkward position when shoeing a horse. “You’re taking little hits all the time,” she says. “The horse is leaning on you or pushing you or dropping extra weight on you. Cumulatively it takes a toll on your body.”

Margie shoes about 20 horses a week. We met her out at the National Center for Equine Facilitated Therapy in Woodside, where she volunteers her services (and also boards her three horses, one of whom, Kit, is shown in photo).

“Margie makes a huge contribution to this organization, shoeing 15 horses every six weeks,” say NCEFT Executive Director Gari Merendino who we profiled in 2011. “Her in-kind contribution saves us thousands of dollars.

Nowadays, Margie would rather ride her horses than compete. As for shoeing, she says she’s learned a lot over the years. “Every new horse makes you better. You learn to be efficient, to apply your skill in distinct ways.”

Photos by Scott R. Kline (2017). The horizontal photo shows the equipment Margie hauls around in her truck.