Menlo Park is the launch site of the No-Gasoline movement

Matthew Metz, Coltura’s founder, shared the history of the no-gasoline movement, from its beginnings as a cultural movement through performance art in Seattle, through its evolution to include the policy goal of phasing out sales of new gas and diesel vehicles by 2030. 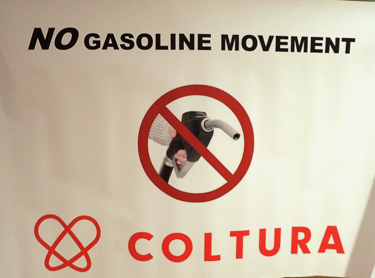 Janelle London, Coltura’s co-executive director, who also chairs Menlo Park’s Environmental Quality Commission, read the proclamation officially launching the movement in California. “California has always led the country on environmental issues,” she said. “Now it’s time for it to lead the movement to phase out gasoline vehicles in America.”

She explained that gasoline causes damage and destruction along every step of its lifecycle, from drilling to extracting to transporting to combusting. She noted that cleaner electric vehicles are already viable for many drivers today, and will be for many more in the next three to five years with lower battery prices, increased vehicle selection, longer ranges, and faster and more ubiquitous charging infrastructure.

“We support Assemblyman Ting’s bill,” said Janelle. “It’s just that we believe the gasoline phase-out can and must start ten years earlier.”

Funny. What a waste of time and ENERGY. As we hear daily of the Tesla and/or Prius users of the world, their cars catching on fire and polluting the atmosphere….contributing to the melting of the glaciers (Global Warming).
What about the child slave labor to obtain the Colbalt in Africa???? Guess that is something you have thought about!
America will not get rid of gasoline products…period.

And where exactly am I going to charge my Tesla? And how long will it take? Will he have enough made by then? I don’t drive American, the Prius still uses gas and that electric BMW is even more hideous than the egg-shaped Tesla X.

Not to mention that pesky mining lithium thing. We need better options than lithium before we move forward. Tesla is more or less an experiment. Let’s keep experimenting.

Craig and Apartment Dweller—you both raise some interesting points:

1) Out of tens of thousands of Teslas and millions of Priuses, only a small handful have caught on fire. It simply isn’t a significant risk. There are many more dangerous fires when cars carrying highly flammable gasoline collide.

2) Electric cars powered by renewables such as wind and solar do not pollute the air or add CO2 to atmosphere, unlike gas cars which emit 20 pounds of CO2 per gallon used. Menlo Park’s mayor has announced that 100% of Menlo Park power will be renewable by 2030.

3) Lithium and cobalt mining are no more intrinsically destructive than mining of other minerals. You are correct that environmental and labor rights vigilance with respect to all mining is important.

4) More work needs to be done to assure that everyone, including apartment dwellers, have access to electricity to charge their cars. This will be accomplished with a mix of fueling stations and laws requiring landlords to put electric charging capability in their buildings.

The climate crisis is here and demands action on gasoline, the leading source of pollution in California. The problems that you mention are relatively minor concerned with the climate change crisis, and can be addressed with intelligent policies.

Matt…your #1. ” It simply isn’t a significant risk” , comment is a comment that I would expect from either and progressive or a stock holder in “Tesla”. I wonder if you recall the Ford Pinto gas tank fiasco? Or maybe the Corvair recall? A small handful of fires is not important…..you are one sick puppy, Matt. How about the fumes from the Lithium and cobalt that burn in the “small” hand full of fires. I observed a Tesla fire in the Austrian Alps where numerous fire fighters and trucks could NOT contain the fire and breathing the dark black fumes. The Cobalt keep reigniting even after the vehicle was in the junk yard where it belongs.
#2. The Menlo Park mayor will do or say anything to keep her job. She is unrealistic and most likely will not be around in 2030!
#3. The mining of Cobalt in Africa is done by children as young as 8 years of age and is a forced slavery type of work….mostly earning pennies on the day. https://www.washingtonpost.com/graphics/business/batteries/congo-cobalt-mining-for-lithium-ion-battery/ .
#4. Maybe Tesla could provide 300′ electrical cords with their 80-100K battery cars?

If you are really worried about vehicle fires, best stay out of gas cars!

Not worried about gas fires at all. How many deaths of children mining the Cobalt, Matty Boy?

If it’s child labor that’s of concern, also better not be wearing any clothes from The Gap, H&M and other major clothes manufacturers — all shown to have horrible child labor practices.

As far as deaths associated with sources of energy, fossil fuels are the hands-down biggest killer — of people, animals, habitats, and the environment.

The solution is ethical sourcing — not rejecting electric vehicles. Some companies like Apple and Tesla are starting to ethically source their batteries, but more progress needs to be made.

By the way, if you’re wondering how you got the idea that the cobalt mining for lithium ion batteries for all the cell phones, laptops and thousands of other battery-powered devices was ok, but suddenly drew the line at EVs, you can thank oil-interest propaganda.

Jannelle, just like the well dressed Kenyan who created the worst health care system in American history, you have learned the “political correctness” form of selling your agenda on “EV’s”!
I was not wondering about “how I got” the idea…..that is such a progressive MO and use of progressive talking points. Ethical sourcing is so gosh and must come from your elitist brainwashing. I would bet you support not only the overthrow of the government, but lets do it Bezerkly style like the antifa Bill Ayers or ALwhoreor Soro’s of the world. Don’t forget he invented the internet….who now use’s those “lithium” batteries in the so called smart phone…..unlike myself who would not own either a laptop or dumb phone. All this hype greatness claims about the “internet” is over rated.
So, I take it from your simple minded comments about child slave labor, you could not care how the Lithium is mined, nor how “the children” are abused….how shameful. That is not very PC of you. You most likely are a big donator to Planned Parenthood, the largest mass murderer of our time!
By the way, I have never shopped at the “Gap” or any other stores you mentioned, I buy American or at least try to. I would never own a Tesla or a Prius type of vehicle and would continue to use fossil fuel guzzling SUV, 4×4. Having that vehicle would allow me to drive right over your “Lithium” $100,000 dollar piece of crap, even while it is on fire!
So, Janeele, you and take your left wing progressive propaganda and shove that into your Lithium minded batteries.

In October, a CNBC headline proclaimed what many watchers have long suspected: Elon Musk is More Rockstar than CEO. And as we all know, rockstars get to live by a different standard than the rest of us commoners.

This seems to be especially true in both the media’s and some government officials’ treatment of Mr. Musk.

“Brotopia,” a forthcoming book by Emily Chang of Bloomberg TV details how last summer, a board member of Musk’s SpaceX and Tesla hosted an outlandish, drug-laced sex party that Musk attended. Allegedly, participants consumed ecstasy called “Tesla;” named after Musk’s company because it turbocharged them like the electric car. One woman recounted how an older male took advantage of her by using illegal substances to alter her decision-making.

This was not the first accusation against Musk organizations. Several female employees have reported rampant sexism and harassment at Musk’s Tesla workplace, labeling it a “predator zone.” Some suggested to company leadership that merely having a female walk around with a GoPro would give them all the evidence of harassment they need. Yet, per NPR, Musk sent an all-staff e-mail saying that while instigators should stop being jerks, affected employees should accept apologies and have thicker skin.

Racism is allegedly a problem in Musk’s companies as well. One factory worker reported that in just his first week of employment, he noticed a supervisor engaging in derogatory name-calling with an African American worker. They fired this whistleblower for allegedly not having a positive attitude, while also terminating the female that sued the company over gender discrimination after the company “debunked” her claims.

Yet in the current frenzy surrounding #MeToo and #BlackLivesMatter Musk seems to have been immune from the outrage and demands for removal directed at others. No one has picked apart his responses to these events, questioned whether he is enabling this behavior, or sought to examine the company culture producing these incidents. The same forces that pushed out Uber’s Travis Kalanick, Matt Lauer, Kevin Spacey, and Al Franken have been strangely silent.

Government officials have extended the same “look the other way” rockstar treatment to Musk’s other companies as well and it could be harming the national security of the United States and costing taxpayers dearly.

This month, it seems that the billion-dollar secret “Zuma” satellite that SpaceX was supposed to carry did not reach orbit. Few details have been supplied, but it looks like this was the third payload lost on a SpaceX Falcon 9 in just four years.

The secrecy surrounding Zuma makes it quite clear than its function was clearly of a sensitive national security nature. Whatever its function was to be, the government is now being forced to operate without it. And yet, the government reacted with dismissal and referred all inquiries on the case to SpaceX, which is of course denying any responsibility.

Was “Ask SpaceX” really the right response to give when a recent audit from the Department of Defense, released in December, showed that would seem closely related to failures such as many hardware and program-related errors, including 33 major problems? Among the issues: a lack of engineering authorizations and approvals, using the wrong tools and ground support equipment, failing to develop software development plans, and leaving equipment unprotected/uncovered?

It would seem some investigation greater than “Ask SpaceX” would be needed in order for the company to begin its scheduled flight tests for sending humans to the International Space Station.

The recent Zuma failure is just the latest example where SpaceX has appeared to receive shelter from the federal government. In break from normal protocols, NASA has also continually refused to release a public report from SpaceX’s 2015 failure involving a Dragon resupply ship. While it claims this is due to the fact that it was an FAA-licensed mission, NASA promptly released one for the October of 2014 failure of SpaceX competitor Orbital Sciences Corporation’s Cygnus cargo ship, also FAA licensed. Both even involved expiring rocket lines and the same NASA Commercial Resupply Services (CRS) program.

Space flight is a tricky business. That is why protocols require checklist after checklist, redundancy, and close examination to understand the exact cause for any failure. Such investigations are critical to protecting security assets headed for space, as well as human life in space travel, and no company should be exempt from these simple measures of transparency.

Whether it’s a corrosive culture of harassment or failing rocketships, even rockstars must be held accountable for their actions. In either case there is too much at stake to do otherwise.

Environmental disaster is not far off, if not abandon gasoline engines in the near future.