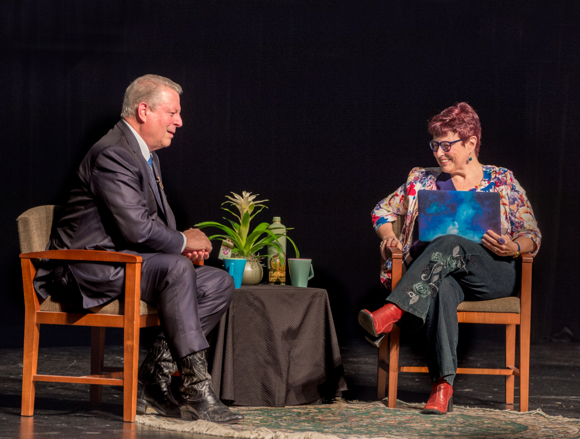 The truth continues to be inconvenient, according to former Vice President Al Gore who appeared on the Peninsula earlier in December as part of Kepler’s Literary Foundation‘s speaker series.

The Nobel Laureate talked about his latest book, An Inconvenient Sequel: Truth To Power, in conversation with Angie Coiro (top photo), who is now the Literary Foundation’s journalist-in-residence. Before an audience that numbered over 600, they discussed how every person can play a part in stabilizing climate and rescuing the earth for future generations.

The audience included students from Eastside Prep (photo below), a school in the Ravenswood School District that the Foundation does active outreach to. “Their teachers did a great job of prepping them about the Vice President and his advocacy for the environment,” said Jean Forstner, Executive Director of the Foundation. “We got them backstage to meet him and ask questions, and each student received a copy of his newest book.” 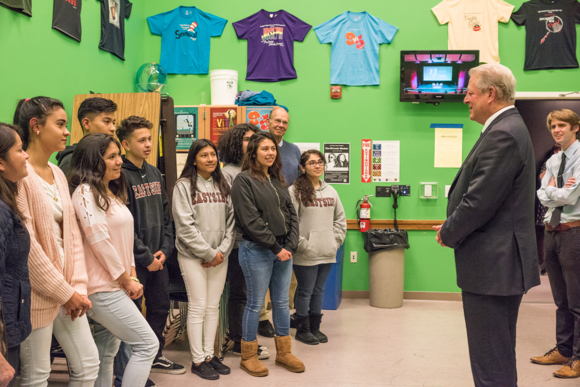 The students were not the only guests to visit backstage. Menlo Park resident Dr. Oscar Salvatierra also got to catch up with Al Gore (photo, above right). Dr. Salvatierra worked with the Vice President on the drafting of the National Organ Transplant Act of 1984. Because of this legislation, numerous patients with end stage organ failure have had a second chance at life with a successful organ transplant.

A list of upcoming Kepler’s Literary Foundation events is available online. The Foundation is separate from the book store and community support through volunteering and tax-deductible donations are critical to its mission.