The building that houses The Oasis, which will close on March 7, has a history that predates its 60 years as a beer garden. Emails Barbara Wilcox, who wrote a book about Camp Fremont during World War I:

“[The building] was one of several Camp Fremont YMCAs during the war. Every unit had its own YMCA. People in the Beltramo family [who own the property] tell me it was cut into pieces and moved after the war from roughly where Draeger’s is now. 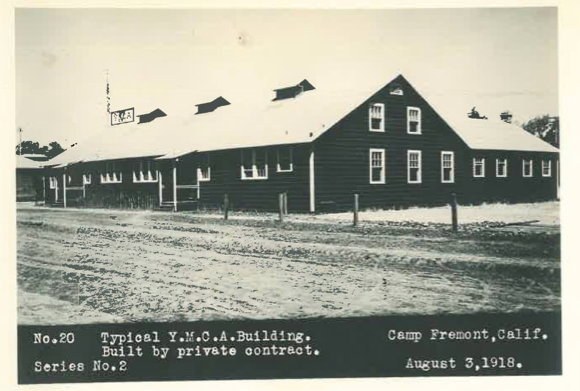 “Also, David Kennedy, the Stanford historian who won the Pulitzer in 2000 and who advised my Camp Fremont thesis, told me was a hasher at the Oasis when he was a Stanford undergraduate.”

According to the Menlo Park Historical Association: “After the repeal of prohibition, Alexander Beltramo (son of John Beltramo), converted what had been the YMCA Building for Camp Fremont into a Beer Garden.”

Top photo taken in 2010 by Chris Gulker; second photo of the building in its World War I years – credit US Army Heritage and Education Center, Fort Carlisle, PA.

This is a historical landmark. Why are the landlord/owners being greedy here and trying to run this longtime small family business out of town? Please save the Oasis! It’s part of our heritage.

Hey. So I have heard more than once, that it use to be a livery stable back when it was first built.