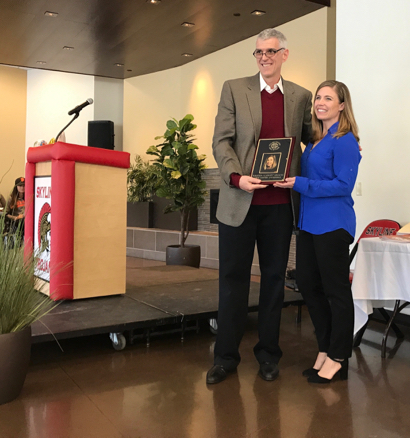 On Saturday, Oak Knoll School Principal, Kristen Gracia, was inducted into the Skyline College Hall of Fame to honor her time there as a two-sport star, twice named MVP in softball, along with being the MVP in Cross Country.

As a student at Skyline College, Kristen was awarded the Garlington Award for her athletic accomplishments and academic success. After graduating from Skyline, she transferred to Sonoma State, where she completed her degree, played softball and decided to pursue an advanced degree in education. Since then, she has pursued two Masters degrees and worked as a teacher before becoming a school administrator.

At the awards ceremony, Kristen paid tribute to her fellow inductees, who were all women this year, and the many women who set an example for them, by working hard on and off all the field. She also thanked Skyline College because the two years she spent there were formative in many ways.

“Too often community colleges are overlooked as a great option for students and instead many times seen as ‘less than’ in the world of degree pathways,” she said.  “As a school leader and a first generation college graduate, I see how my own path through education influences the work we do at our school to open doors of opportunities and access for all kids.”

Finally, she thanked her family, including her parents, in-laws, husband and children, who were all present at the awards ceremony. At an early age, her parents instilled in her the belief that through hard work she could do anything. “It made me see possibilities that I might not have paid attention to then and keeps me seeing them not only for myself but for my girls,” she said.

Congratulations Kristen! You are a great role model for your Oak Knoll students!

Congratulations Kristen! You set a positive example for many!