Wow – the famous LincVolt makes an appearance in Menlo Park

Setting the stage on this one: Your spouse is parking at the Stanford Park Hotel in advance of dinner at the Menlo Grill in a space next to where the electric cars plug in.

Both being of a certain age, they remember the boat-sized cars of the late 50s and early 60s, so take notice of the huge Lincoln Continental that is parking to their left. Then they see the driver plugging it into one of the hotel/restaurant’s two charging stations. That would be enough to get their attention. 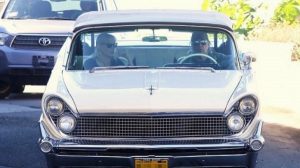 The next 10 seconds are a blur. Wow, they say almost simultaneously. That’s Neil Young plugging the car in. That’s his companion Daryl Hannah at his side. Here in Menlo Park? Really.

“Nice car,” says the spouse to Neil. “Thanks,” says Neil.

Not to be anti-climatic, but they then spent dinner trying to figure out just why the famous couple would be in Menlo Park. Can not believe the guitarist/singer is going to crash the Tribute Band performance at the Fox Theater on April 29.

That they were there for less than five minutes, maybe they were just picking up a friend or associate.

The question remains: Given the short time, was plugging-in a necessity?

For those how want more background, the LincVolt is a 1959 Lincoln Continental that was converted into a more file-efficient, hybrid demonstrator vehicle; details on the LincVolt website. It’s thought that Young’s hybrid car started a devastating fire at his warehouse in 2011.