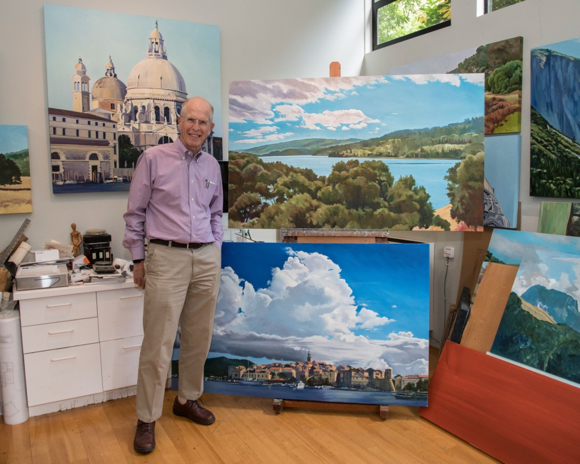 Architect and artist Jim Caldwell, who we first profiled in 2014, admits that fans of his landscape paintings think of “oaks on golden hills,” but he’s interested in expanding his subject matter such as he’s done in recent years with paintings of the San Joaquin Delta and New Zealand. 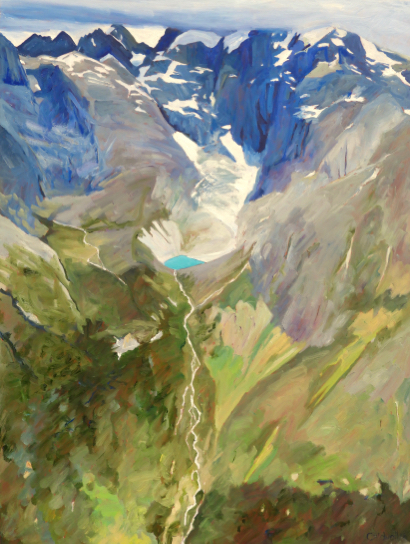 The 20 or so paintings on display through July 12 at Art Ventures Gallery in downtown Menlo Park (888 Santa Cruz Avenue) focus on water and span at least two decades. There will be a reception for Jim from 6:30 to 8:30 pm on Thursday, June 14, with a talk by the artist at 7:00 pm.

It was a trip on the Canal du Midi in France that sparked Jim’s interest in water. “Until then, I had been doing still life paintings,” he said. “It was such a riveting experience. That got me into painting landscapes and also the world of water.”

At the “finisage” as gallery owner Katharina Powers calls the end of a show — in this case on July 12 — Jim will give a talk at 7:00 pm, accompanied by slides, about Claude Monet. “Much of it is based on Monet’s early works that were on display at the Legion of Honor last year,” Jim said. “Monet, of course, is known for his water paintings. There will be a much exhibit of Monet’s later paintings at the DeYoung next year.”

How Jim landed at Art Ventures is a very local story, as the artist explained: “I was standing in line at the Guild Theater when someone mentioned this new gallery in Menlo Park. I stopped by, loved the space, the light, and high ceilings and got to know Katharina. It’s the first legitimate gallery I’ve been associated with in a long time.”